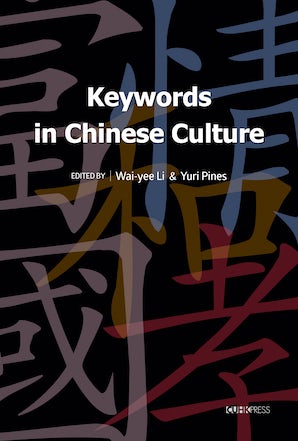 Like every major culture, Chinese has its set of keywords: pivotal terms of political, ethical, literary, and philosophical discourse. Tracing the origins, development, polysemy, and usages of keywords is one of the best ways to chart cultural and historical changes. This volume analyzes some of these keywords from different disciplinary and temporal perspectives, offering a new integrative study of their semantic richness, development trajectory, and distinct usages in Chinese culture.

The authors of the volume explore different keywords and focus on different periods and genres, ranging from philosophical and historical texts of the Warring States period (453–221 BCE) to late imperial (ca. 16th–18th centuries CE) literature and philosophy. They are guided by a similar set of questions: What elevates a mere word to the status of keyword? What sort of resonance and reverberations do we expect a keyword to have? How much does the semantic range of a keyword explain its significance? What kinds of arguments does it generate? What are the stories told to illustrate its meanings? What are political and intellectual implications of the keyword’s reevaluation? What does it mean to translate a keyword and map its meaning against other languages?

Throughout Chinese history, new ideas and new approaches often mean reinterpreting important words; rupture, continuities, and inflection points are inseparable from the linguistic history of specific terms. The premise of this book is that taking the long view and encompassing different disciplines yield new insights and unexpected connections. The authors, who come from the fields of history, philosophy, and literature, explore keywords in different genres and illuminate their multiple dimensions in various contexts. Moreover, despite their different temporal focus, they take into consideration the development of selected keywords from the Warring States to the late imperial period, sometimes adding excurses that extend to contemporary usage.

WAI-YEE LI is professor of Chinese literature at Harvard University. She has written on early Chinese thought and historical writings as well as Ming-Qing literature and culture. Her books include Women and National Trauma in Late Imperial Chinese Literature (2014) and Plum Shadows and Plank Bridge: Two Memoirs about Courtesans (forthcoming).

YURI PINES is professor of Chinese history at the Hebrew University of Jerusalem. His monographs include The Book of Lord Shang: Apologetics of State Power in Early China (2017); The Everlasting Empire: Traditional Chinese Political Culture and Its Enduring Legacy (2012); and Envisioning Eternal Empire: Chinese Political Thought of the Warring States Era (2009).