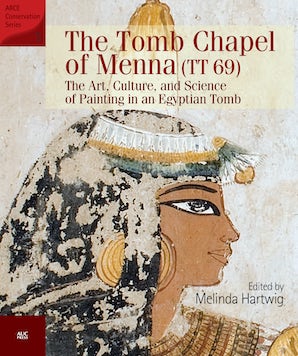 The Art, Culture, and Science of Painting in an Egyptian Tomb

The most detailed set of studies ever on all aspects of one of the most beautifully decorated Egyptian non-royal tombs, new in paperback

This lavishly illustrated book is the culmination of a project to document and conserve the tomb of Menna, one of the most beautiful and complex painted tombs of the ancient Egyptian necropolis at Luxor. Through conservation, the tomb, which previously lay open to environmental influence, was brought back to its former glory.

Aided by non-invasive methods of scientific analysis, the historical and cultural importance of Menna’s paintings can now be viewed and studied and enjoyed by a worldwide audience. High-definition photography and drawings complement specialist essays by scholars, scientists, and technicians, who discuss the artistic and cultural significance of the paintings, their architectural context, and scientific importance.

Directed by Dr. Hartwig and administered by the American Research Center in Egypt (ARCE) as part of its Egyptian Antiquities Conservation Project, the project was funded by a grant from the United States Agency for International Development (USAID), sponsored by Georgia State University, and carried out in collaboration with Egypt’s Supreme Council of Antiquities.