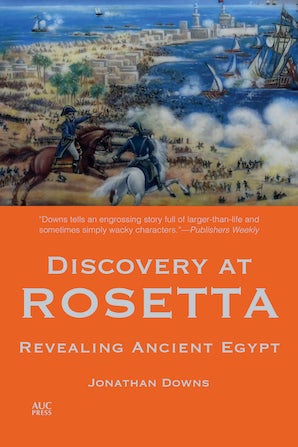 In 1798, young French general Napoleon Bonaparte entered Egypt with a veteran army and a specialist group of savants—scientists, engineers, and artists—his aim being not just conquest, but the rediscovery of the lost Nile kingdom. A year later, in the ruins of an old fort in the small port of Rosetta, the savants made a startling discovery: a large, flat stone, inscribed in Greek, demotic Egyptian, and ancient hieroglyphics. This was the Rosetta Stone, key to the two-thousand-year mystery of hieroglyphs, and to Egypt itself. Two years later, French forces retreated before the English and Ottoman armies, but would not give up the stone. Caught between the opposing generals at the siege of Alexandria, British special agents went in to find the Rosetta Stone, rescue the French savants, and secure a fragile peace treaty.

Discovery at Rosetta uses French, Egyptian, and English eyewitness accounts to tell the complete story of the discovery, decipherment, and capture of the Rosetta Stone, investigating the rivalries and politics of the time, and the fate of the stone today.