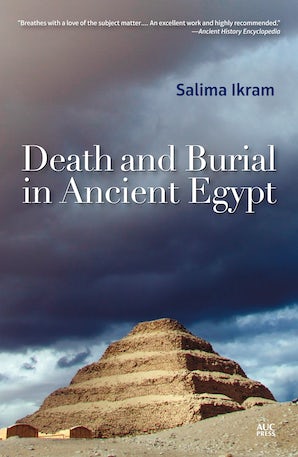 Death and Burial in Ancient Egypt

Death, burial, and the afterlife were as important to the ancient Egyptians as how they lived. This well-illustrated book explores all aspects of death in ancient Egypt, including beliefs of the afterlife, mummification, the protection of the body, tombs and their construction and decoration, funerary goods, and the funeral itself. It also addresses the relationship between the living and the dead, and the magico-religious interaction of these two in ancient Egyptian culture. Salima Ikram's own experience with experimental mummification and funerary archaeology lends the book many completely original and provocative insights. In addition, a full survey of current development in the field makes this a unique book that combines all aspects of death and burial in ancient Egypt into one volume.

Salima Ikram is professor of Egyptology at the American University in Cairo, and has worked in Egypt since 1986. She has directed the Animal Mummy Project, co-directed the Predynastic Gallery project, and has served as co-director and subsequently director of the North Kharga Oasis Survey. Ikram has worked on several excavations throughout Egypt as well as in Turkey, Sudan, and Greece, and she is currently very involved with the preservation and presentation of cultural heritage. She is the editor of Divine Creatures: Animal Mummies in Ancient Egypt (AUC Press, pbk ed., 2015).