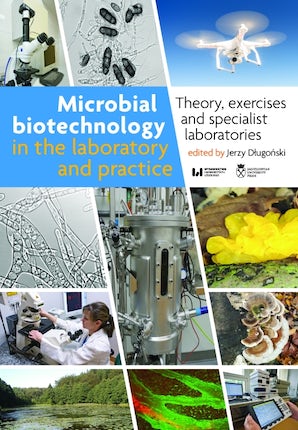 Microbial Biotechnology in the Laboratory and Practice

In addition to the issues constituting the basis of microbial biotechnology, such as microorganisms culturing or their use in industry and environmental protection, the book includes modern analytical techniques known as "omics", as well as digital techniques used to record adverse changes in the environment those resulting from the harmful activity of bacteria and fungi. A color atlas (Chapter 8) with photos of the fungi discussed in each chapter was also included. The book was prepared with the use of many years of scientific and didactic experience of the authors who conduct classes in various fields and specializations of natural sciences. This resulted in the interdisciplinary nature of the publication. It will be useful not only for PhD students and students of biotechnology and microbiology, but also environmental protection, ecological biotechnology, urban revitalization, as well as all those interested in applying the latest achievements of these areas of science in practice.

Jerzy Aleksy Długoński, professor of biological sciences, specialization: microbial biotechnology, industrial microbiology and mycology. In 1971, he graduated in biology, specialization in microbiology, at the Faculty of BNZ (Faculty of Biology and Earth Sciences, now the Faculty of Biology and Environmental Protection) at the University of Łódź, Poland. At the same Faculty he defended his doctoral (1979) and habilitation thesis (1993) on the production of anti-inflammatory steroid drugs by bacteria and fungi. After habilitation, he extended his research area to include issues related to microbial detoxification and biodegradation of xenobiotics that are particularly harmful to the environment. In the years 1993-1996 he was the deputy vice-dean of the Faculty of BNZ, University of Lodz, and from 1996-2008 he was the deputy director of the Institute of Microbiology, Biotechnology and Immunology of the University of Łódź. In the years 1994 - 2018 he headed the Department of Industrial Microbiology and Biotechnology, University of Łódź. He is the promoter of 9 defended doctoral theses, two more are nearing completion. Author and co-author of numerous peer-reviewed publications in the field of microbial physiology and biotechnology, including the book Microbial Biodegradation From Omics to Function and Application, which was published in England by a scientific publishing house specializing in publications on the latest achievements of molecular biology - Caister Academic Press UK. Reviewer of numerous doctoral and habilitation theses and applications for the academic title of professor. From 2013 to 2020, he was a member of the Central Committee for Degrees and Titles (Poland). Co-organizer of a number of national and international congresses in the field of microbiology and biotechnology.