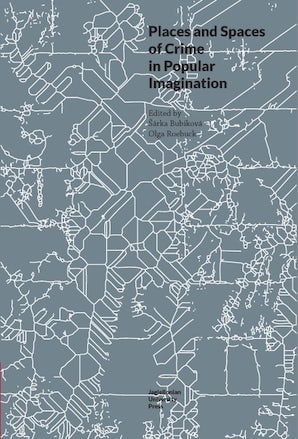 Places and Spaces of Crime in Popular Imagination

The publication Places and Spaces of Crime in Popular Imagination is part of the Topographies of (Post)Modernity: Studies in 20th and 21st Century Literature in English Series. The text reflects growing interest in popular literary genres not only among the readers, but mainly in literary research. This still rather under-researched area is now representing fertile grounds for various theoretical approaches. As the publication mainly declares its interest in crime-related genres, its focus on place is justifiable: it reflects the postmodern “spatial turn”, manifested in an increased emphasis on the location of crime, not necessarily in the sense of the crime scene itself, but as a socio-geographical place and space.
The setting of crime has a specific and well-defined role in the traditional crime genres, but this role has been redefined in the modern versions of crime-related fiction. ranging from educating the reader in certain areas, bringing up current problems, deepening the psychological aspect of individual characters etc. The published volume brings forth various aspects of this new role of place in popular genres centering on crime and gives space to its deeper analysis. It is not the researchers´ objective to provide overviews of the history of the theoretical discussion of place and space in literature in general. Instead, although the essays do employ a variety of critical approaches, the collection strives to show practically how place and space is employed in the specific material of the selected works.
The seven chapters are written by scholars from the Czech Republic, Poland and Slovakia. Two essays represent London as a topos and a chronotope in the works by contemporary British writers of crime fiction. The selection is to show how varied the literary London can be, albeit in the often rather formulaic popular genre. The essays also document a shift from the country setting typical for the British Golden Age of detective fiction to the more recent urban focus. One contribution focuses on the genre of spy novel to show how rendering of place and space can contribute to the genre’s typical atmosphere of suspense, secrets and disquiet. Four more essays analyze a variety of places and spaces in American crime fiction, crime comics and crime film. All of the places are in some way specific to American milieu – the suburbia, the university campus, the wilderness, a holiday resort with a state park. These essays are designed to show the contemporary variety of places where crime literature (or film) is set and to document a shift from the traditional urban setting of American hard-boiled fiction to a far greater recent diversity.
The volume brings together most recent central European research on the topic of place and community in popular imagination. Thus, it represents a unique insight into this growing phenomenon, which can no longer be overlooked by the academic community.

Šárka Bubíková, Associate Professor at the University of Pardubice, specializes in modern American literature, Anglophone children’s literature, contemporary ethnic Bildugsroman and crime fiction. Apart from numerous articles and book chapters, she has published books examining the American literary canon (2007) and the influence of the changing concept of childhood on literary production for children (2009) and co-authored Literary Childhoods: Growing Up in British and American Literature (2008). Currently, she is working on a project on (ethnic) crime fiction. She also writes fiction. In 2010, she was a Fulbright research scholar at Amherst College, Amherst, MA, and in 2012, a visiting researcher at the University of California in Santa Barbara.

Olga Roebuck is an Assistant Professor at the University of Pardubice. She has received her M.Litt in Cultural Studies at Strathclyde University in Glasgow and her PhD in English and American Literature at Charles University in Prague. Among her research interests are cultural identities in contemporary Scottish fiction, mainly popular fiction. Currently, she is cooperating on a research titled Place and Community in Contemporary Anglophone Crime Fiction supported by the Czech Science Foundation grant GA CR 19-02634S.