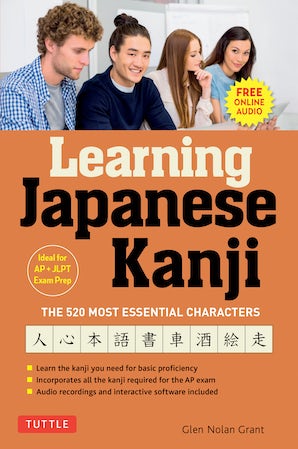 The 520 Most Essential Characters (With online audio and bonus materials)

An enjoyable and effective way to learn Japanese kanji!

This useful reference book helps self-study and classroom students remember the meanings and pronunciations of 520 essential kanji. An otherwise daunting task, memorization is made easier with this book--which uses mnemonic techniques based on the psychology of learning and memory. Key principles include the use of visual imagery, the visualization of short "stories," and the systematic building-block approach that shows how more complicated characters are constructed from basic elements.

This is a practical guide with a clear, concise, and appealing layout; it is well-indexed with easy look-up methods. The kanji in this volume give you the majority of characters you will encounter in daily life, from newspapers to street signs. It also includes the kanji required for the AP Japanese exam and N4 & N5 JLPT tests.

Glen Nolan Grant is a Canadian postal worker and acclaimed translator. He has traveled extensively, visiting over 60 countries and learning to speak six languages. He became attracted to the Japanese writing system while living in Japan. When he learned that many consider Japanese to be the most difficult written language in the world, he took on the challenge of finding a way to make learning it easier.

He came upon the main idea for this book while traveling through Africa. Viewing the constellations in the night skies, and realizing that drawing pictures has helped people "see" and remember since time immemorial, he realized that you could draw "pictures" around kanji for the same purpose.