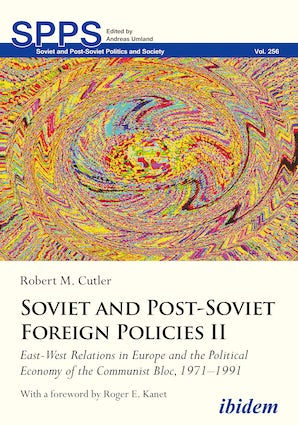 East-West Relations in Europe and the Political Economy of the Communist Bloc, 1971–1991

This collection of studies investigates the political economy of international relations between the Soviet bloc and West European countries, both individually and cohering as the European Economic Community / European Communities. It spans the entire post-Stalin era, focusing on the 1970s and 1980s. The works examine international trade patterns in East–West relations; Soviet views of West European integration and their influence on practice, also for the bloc as a whole; and reciprocal effects on Soviet domestic politics and foreign policy more under Gorbachev and in historical perspective.
Extensive references make this volume a handbook which is of interest not only to researchers, but also to university students and the general public.

Dr. Robert M. Cutler, educated at MIT and The University of Michigan, is a Fellow of the Canadian Global Affairs Institute, Director (and Senior Research Fellow) of the Energy Security Program at the NATO Association of Canada, and a Practitioner Member of the University of Waterloo’s Institute for Complexity and Innovation. He has been IREX Fellow at Moscow State University, Post-doctoral Fellow at the Harriman Institute of Columbia University, and Gallatin Fellow at the University of Geneva. He has taught and worked elsewhere in Canada, France, Switzerland, and the United States, notably as Senior Researcher at the Institute of European, Russian, and Eurasian Studies of Carleton University. Cutler is editor of The Basic Bakunin (Prometheus 1992) and the author of How Soviet Foreign Policy Failed (ISCE 2013). His research articles have been published in, among other journals, International Affairs (London), International Organization, International Studies Quarterly, Journal of International Affairs, Problems of Communism, Soviet Studies, and World Politics.