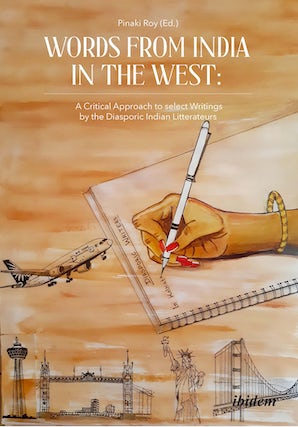 Words from India in the West

A Critical Approach to Select Writings by the Diasporic Indian Litterateurs

This edited volume critically assesses different aspects of five literary genres – novels, poetry, short-stories, drama, and non-fictional prose – contributed to by the Indian diasporic writers settled principally in North America and Europe. Films made by or on members of the Indian diaspora have been also checked out. The predominant approach in the anthology is not only a feminist one, although special emphasis is given on assessing the writings by females.

The emphasis of the anthology is on: (a) critical analyses of themes, styles, diction, and relevance of the writings; (b) assessment of the research potentialities of these writings; (c) examining how literary theories could be used for explaining and assessing the writings; (d) proper contextualization of the writings; and (e) finding out the historical roots and suggesting the future ‘prospects’ of such writings.

His previous books include THE BROKEN PENS: THE (INDIAN) PARTITION IN LITERATURE AND FILMS (Aadi, 2015), WILFRED OWEN: THE MAN, THE SOLDIER, THE POET (Books Way, 2013), THE SCARLET CRITIQUE: A CRITICAL ANTHOLOGY OF WAR POETRY (Sarup, 2010), and THE MANICHEAN INVESTIGATORS: A POSTCOLONIAL AND CULTURAL REREADING OF THE SHERLOCK HOLMES AND BYOMKESH BAKSHI STORIES (Sarup, 2008), and 3 others. His papers have been published by, among other outlets, CLUES, W.L.A., MUSE INDIA, ENGLISH FORUM, VISVA-BHARATI QUARTERLY, and YEARLY SHAKESPEARE.