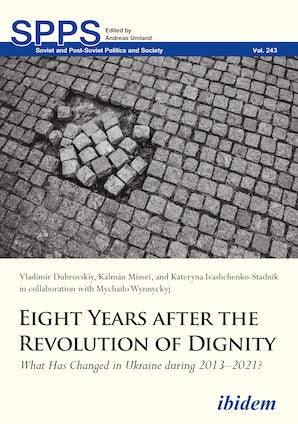 Eight Years After the Revolution of Dignity

This book views the Ukrainian Revolution of Dignity, from a broad systemic perspective, as an ongoing process in which societal, economic, political, and institutional developments are intertwined. The Euromaidan and further developments, especially the Russian aggression, accelerated the westward reorientation of the economy, strengthened institutional checks and balances (for instance, through decentralization), changed the main social cleavage from an ethnolinguistic one to a division between urban creative and “oligarchic” classes, reshaped identity towards formation of a political nation, and increased the role of modernizing forces, especially civil society. However, so far, the Revolution has failed to bring about, despite some progress, a critical mass of changes regarding the rule of law while much of the economy remains rent-oriented. If modernizing forces are prudently managed, Ukraine has a chance to move forward on an evolutionary path. Otherwise, new conflicts are possible.

Vladimir Dubrovskiy studied Theoretical Physics at the Shevchenko University of Kyiv. Since 2000, he is a Senior Economist at CASE Ukraine and has also worked with the World Bank, UNDP, GDN, OECD, WEF, Transparency International, as well as the Ukraine Harvard Project on Macroeconomic Reform. He is co-author of, among others: Ukraine: The Lost Decade … and a Coming Boom? (Alterpress 2002), The Driving Forces for Unwanted Reforms: Lessons from the Ukrainian Transition (CASE 2010), and Are Ukraine’s Anti-Corruption Reforms Working? (Chatham House 2018).


Dr. Kálmán Mizsei studied Economics in Budapest. He served as Head of Mission for the EUAM on Civilian Security Sector Reform in Ukraine in 2014–2015 and as EU Special Representative in Moldova in 2007–2011. Earlier, he was Chairman of the Making the Most of EU Funds for Roma Integration at the Open Society Foundations, visiting professor at the Central European University in Budapest, UNDP Regional Director for Europe and the CIS, Investment Director of AIG in Central and Eastern Europe, and Chairman of the Hungarian Eximbank & Export Insurance Company.

Dr. Kateryna Ivashchenko-Stadnik studied History, Sociology, and International Development in Donetsk, Prague, Warsaw, and London. She is a Senior Fellow at the Sociology Institute of the National Academy of Sciences of Ukraine and Research Consultant for the Centre of Sustainable Peace and Democratic Development (SeeD) in Nikosia. Her papers have appeared in, among others, the Kyiv-Mohyla Law and Politics Journal and European Sociological Review as well as in volumes under the imprint of PalgraveMacMillan, Anthem Press, and Ashgate.

Dr. Mychailo Wynnyckyj is Associate Professor of Sociology at the Kyiv-Mohyla Academy.


The author of the foreword:

Dr. Yaroslav Hrytsak is Professor of History at the Ukrainian Catholic University of L’viv.