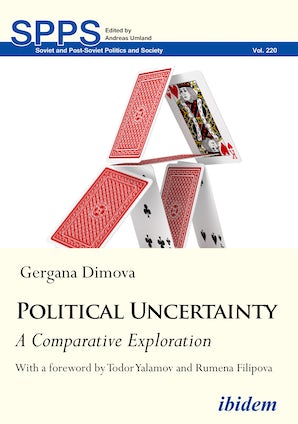 Foreword by Todor Yalamov and Rumena Filipova By Gergana Dimova

This timely book provides a comprehensive analysis of political uncertainty and one of the first efforts to empirically measure it. Gergana Dimova compares political ambiguity within both established as well as unconsolidated democracies and explores institutional, behavioral, and media factors influencing such uncertainty. Combining aggregate statistical analysis and qualitative case studies, she seeks to provide answers to some hotly discussed questions of comparative politics, such as: To what extent is uncertainty invariable and unavoidable in political life? Why does uncertainty arise and how is it affecting liberal democracies?
In conclusion, Dimova argues that even in so-called “managed democracies,” such as Russia, uncertainty is rife. Yet it is of a very different type there than ambiguity in more established democracies, such as Germany. Overall, this book furnishes important insights about the value of uncertain actions in political life and useful tips about how and when to combat it.

Gergana Dimova, PhD (Harvard), studied German culture, economics, and government at Mount Holyoke, Heidelberg, and Cambridge, Mass. Since 2017, she has been an associate lecturer in political science at the University of Winchester, England. Previously, she was a Jeremy Haworth Research Fellow at the University of Cambridge. Dr Dimova is also chair of the Anti-Politics Specialist Group of the UK Political Studies Association, and serves on the board of the Journal of Soviet and Post-Soviet Politics and Society (JSPPS). She is author of Democracy beyond Elections: Government Accountability in the Media Age (Palgrave 2019) and editor of the “Russia’s Annexation of Crimea” series of special JSPPS sections. Her articles have been published by, among others, Demokratizatsiya, Global Media Journal, the Atlantic Council, and The Huffington Post.

Dr Rumena Filipova is Research Fellow at the Centre for the Study of Democracy at Sofia.

Dr Todor Yalamov is Associate Professor of Management at the St. Kliment Ohridski University of Sofia.