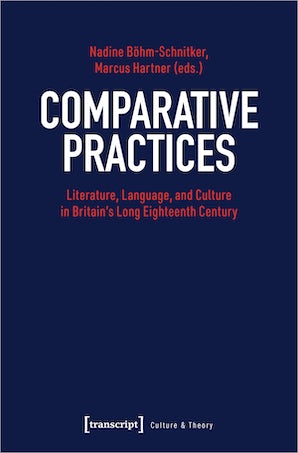 Comparisons not only prove fundamental in the epistemological foundation of modernity (Foucault, Luhmann), but they fulfil a central function in social life and the production of art. Taking a cue from the Practice Turn in sociology, the contributors are investigating the role of comparative practices in the formation of eighteenth-century literature and culture. The book conceives of social practices of comparing as being entrenched in networks of circulation of bodies, artefacts, discourses and ideas, and aims to investigate how such practices ordered and changed British literature and culture during the long eighteenth century.

Nadine Böhm-Schnitker is a senior lecturer in English studies: literature and culture at Friedrich-Alexander-Universität Erlangen-Nürnberg and stand-in professor for American studies at Universität Bielefeld. She is an associate member of the Collaborative Research Centre 1288 "Practices of Comparing" funded by the German Research Foundation (DFG) and particularly interested in the power imbalances entailed in practices of comparing. Her further interests include contemporary literature and culture (e.g. neo-Victorian studies, BrexLit), the literary and cultural impact on perception, as well as cultural responses to ecological concerns such as climate change.

Marcus Hartner is a senior lecturer in English studies at Universität Bielefeld. He is an associate member and former principal investigator of the Collaborative Research Centre 1288 "Practices of Comparing" funded by the German Research Foundation (DFG). His main fields of research encompass the study of narrative and the intersection of race, gender, and class in early modern literature and culture. Among his further research interests are the study of migration literature, maritime humanities, and Anglo-Muslim relations in the sixteenth and seventeenth centuries.