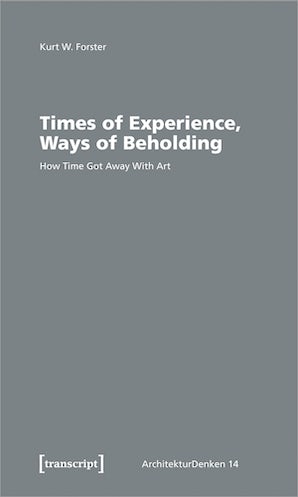 Times of Experience, Ways of Beholding

How Time Got Away With Art

Time is of the essence in human affairs. In the 18th century, geology discovered its unfathomable depths and the sciences sought to place every organism on a timeline. Just as the earth acquired a history, architecture and art found ways of locating themselves in a perspective that vanishes in the anthropocene, urging fresh inquiry into artistic perception. Whether we consider the city a heap of materials, the Eiffel Tower a metallurgical monument comparable to Richard Wagner's lengthy operas, or capture an angle of Paris in a sketch Alberto Giacometti made in the brief interval of changing traffic lights, the ways we behold things and experience them always bears the imprint of (father) time.

Kurt Walter Forster is a visiting professor at the Yale School of Architecture (since 2005), and at Princeton University. He has taught in the U.S. and in Europe (Stanford; M.I.T.; ETH Zurich; Bauhaus University Weimar), founded and directed institutes (Getty Research Institute, Los Angeles; Canadian Centre for Architecture, Montreal), organized numerous exhibitions and directed the Venice Biennale in 2004. He is an Honorary Fellow of the Royal Institute of British Architects, Accademico di San Luca, recipient of the Meret Oppenheim prize and of an architecture award from the American Academy of Arts and Letters.