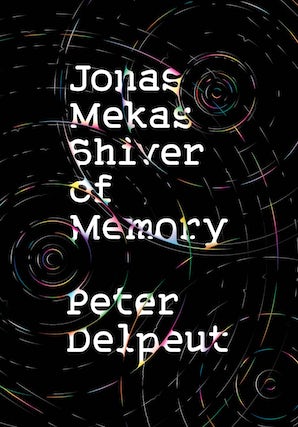 The texture of memory and the ability of art and film to bear witness to traumatic events are delicately approached in this book-length essay by a Mekas cinephile.

For years, filmmaker Peter Delpeut has had Jonas Mekas's Movie Journal within easy reach of his desk. Since his student days, he has been a great admirer of the Lithuanian-American ‘Godfather of avant-garde cinema’. Until he was startled in June 2018 by an article in The New York Review of Books. Historian Michael Casper claimed that Mekas had deliberately forgotten or misrepresented certain events during World War II. Seeded by this controversy over Mekas’s memories of his Lithuanian youth and Mekas’s pain over his subsequent exile, Delpeut’s essayistic and self-reflective book flowers into an inquiry about memory and forgetting; the moral compass of the future that cannot find its bearing in the past; the abilities of art to witness; and the roles we all must play in writing the adequate history of events too traumatic for a just accounting.

Although there is little doubt that Mekas himself never participated in the horrors of the Holocaust in Lithuania, his silence about the fate of his Jewish countrymen and neighbors could be said to enable a rewriting of history, at the sacrifice of witness testimonies. As Delpeut follows Mekas through films, diaries, his public performances, his speeches, and finally his testimony given to the United States Holocaust Memorial Museum (USHMM), he encounters an impasse for which he was not prepared.

Peter Delpeut (b.1956) is a Dutch author and filmmaker currently living in Amsterdam. He has written four novels, several essay books on art and film, and two lyrical books about long distance cycling.  For his debut novel in 2007 he was nominated for the Gerard Walschap Prize and awarded the Halewijn Prize. He has made critically acclaimed and prizewinning films in many genres: found footage, documentary and features. He studied philosophy and film theory, graduating from the Dutch Film Academy in 1984 before serving as editorfor film magazines Skrien and Versus. From 1988 to 1995 he worked as curator and deputy-director for the Netherlands Filmmuseum (now Eye), famous at the time for its revolutionary color preservations of films from the silent era. In 2005 a retrospective of his film work was presented in Washington, New York and Berkeley.