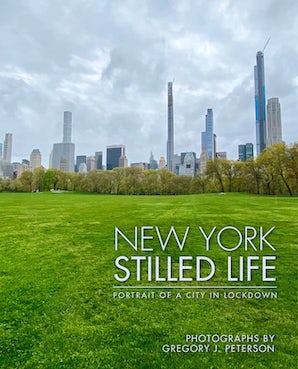 Mid-March 2020: native New Yorker Gregory Peterson is on an early evening walk through the city, suddenly shut down by the coronavirus pandemic. Manhattan’s grand public spaces are bare. The monumental Lincoln Center Plaza is empty. The sounds of skates on ice and bustle of tourists and workers at Rockefeller Center are absent. Not a soul on Easter Sunday at the Cathedral of Saint John the Divine. Starkly silent, the city is stilled, as no one had ever seen it before.

Traveling on foot and by bike to avoid public transportation, Peterson took more than 400 photographs of over 200 locations in Manhattan, Brooklyn, and Queens through the spring and summer of 2020. Using his iPhone 11, he captured myriad surreal landmarks—the United Nations Secretariat with no traffic, people, or flags, Grand Central Terminal without a person or even a car in sight, as well as gelled neighborhood streets, churches, shops, and other tourist destinations.

Without people, these photos reveal the city’s primeval soul. They unveil a serene beauty most often obscured by the frenzy of our fast-paced lives. We see New York with new eyes. The first reaction to Gregory Peterson’s poised, chilled shots of New York City is: Must be trick photography. He’s Photoshopped the people out—or else a sunny daylight in—in what must have been shots from the dead of night. But no: This is the capital of the world in lockdown. One has to go to de Chirico’s imaginary metaphysical paintings of Italian cities to find such radical depopulation. —David Cohen, editor, Artcritical.com

During the height of the lockdown, Peterson also captures the city’s response to swelling Black Lives Matter protests that shook the world after the killing of George Floyd. For the first time in living memory, midtown Manhattan and other areas were boarded up following Memorial Day due to fears of civil unrest as, documented in the chapter “Plywood New York.”

New York: Stilled Life is a comprehensive record of a unique, vanished moment; a memento of a time we all endured and how it changed us and our cities—perhaps forever.