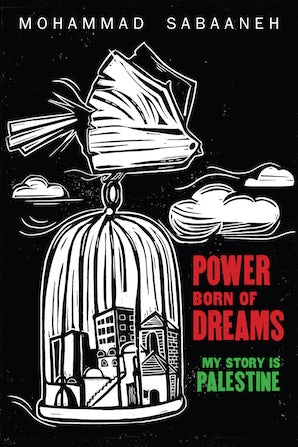 My Story is Palestine

“An artistic triumph that will stand as an enduring testament to the spirit of the Palestinian people. Mohammad Sabaaneh is a master.”--Joe Sacco, winner of the American Book Award for Palestine

What does freedom look like from inside an Israeli prison?

A bird perches on the cell window and offers a deal: “You bring the pencil, and I will bring the stories,” stories of family, of community, of Gaza, of the West Bank, of Jerusalem, of Palestine. The two collect threads of memory and intergenerational trauma from ongoing settler-colonialism. Helping us to see that the prison is much larger than a building, far wider than a cell; it stretches through towns and villages, past military checkpoints and borders. But hope and solidarity can stretch farther, deeper, once strength is drawn of stories and power is born of dreams. Translating headlines into authentic lived experiences, these stories come to life in the striking linocut artwork of Mohammad Sabaaneh, helping us to see Palestinians not as political symbols, but as people.

Mohammad Sabaaneh is a Palestinian cartoonist and a former political prisoner in Israel. His work has been published in the Middle East Monitor as well as Al-Quds Al-Arabi, and he is the principal political cartoonist for the Palestinian Authority’s daily newspaper, Al-Hayat al-Jadida. Mohammad is a Middle East representative for the Cartoonists Rights Network International and teaches art at the Arab American University of Palestine. His work has been included in international art fairs around the world. He has taken part in workshops to use cartooning to help children develop critical thinking and express their feelings. The author of White and Black, he recently received his master’s degree on a Chevening Scholarship from the University for the Creative Arts, London, UK. And he currently lives in Ramallah, in the West Bank.