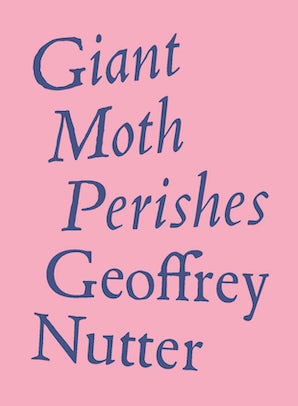 With exquisite detail and humble sensibilities, Geoffrey Nutter’s sixth collection of poetry offers myriad delights in language and the imagination. In cityscapes, nature, books, and color, we find respite in the complexities of the commonplace—from clocks to teardrops to moths. The poems in Giant Moth Perishes teach us how to live in the world with curious attention. And at the heart of this daydreaming is a spectacular earnestness, firmly embedded in the idea that the landscape of poetry is limitless and wild.

Geoffrey Nutter is the author of A Summer Evening (winner of the 2001 Colorado Prize), Water’s Leaves & Other Poems (Winner of the 2004 Verse Press Prize), Christopher Sunset (winner of the 2011 Sheila Motton Book Award), The Rose of January (Wave Books, 2013), and Cities at Dawn (Wave Books, 2016). He recently traveled in China, giving lectures, workshops, and readings as a participant in the Sun Yat-sen University Writers’ Residency. Geoffrey’s poems have been translated into Spanish, French, and Mandarin. Soir d’été, a bilingual edition of his poems translated into French by poets Molly Lou Freeman and Julien Marcland, was recently published in France, and a German translation of his book Water’s Leaves & Other Poems will appear in 2021. He has taught poetry at Princeton, Columbia, University of Iowa, NYU, the New School, and 92nd Street Y. He currently teaches Greek and Latin Classics at Queens College. He runs the Wallson Glass Poetry Seminars in New York City.