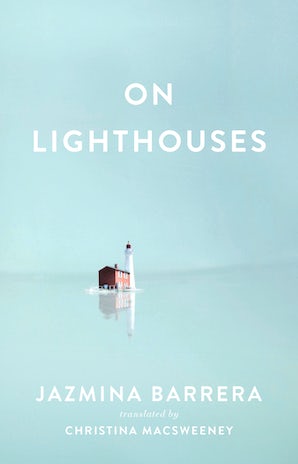 “This book is a light at the end of the tunnel.” —The Paris Review

Far from home, in the confines of a dim New York apartment where the oppressive skyscrapers further isolate her, Jazmina Barrera offers a tour of her lighthouses—those structures whose message is “first and foremost, that human beings are here.”

Starting with Robert Louis Stevenson’s grandfather, an engineer charged with illuminating the Scottish coastline, On Lighthouses artfully examines lighthouses from the Spanish to the Oregon coasts and those in the works of Virginia Woolf, Edgar Allan Poe, Ingmar Bergman, and many others.

In trying to “collect” lighthouses by obsessively describing them, Barrera begins to question the nature of writing, collecting, and how, by staring so intently at one thing we are only trying to avoid others. Equal parts personal memoir and literary history, On Lighthouses takes the reader on a desperate flight from raging sea to cold stone—from a hopeless isolation to a meaningful one—concluding at last in a place of peace: the home of a selfless, guiding light.

Jazmina Barrera was born in Mexico City in 1988. She was a fellow at the Foundation for Mexican Letters. Her book of essays Cuerpo extraño (Foreign Body) was awarded the Latin American Voices prize from Literal Publishing in 2013. She has published her work in various print and digital media, such as Nexos, Este País, Dossier, Vice, and more. She is editor and co-founder of Ediciones Antílope. She lives in Mexico City.

Christina MacSweeney received the 2016 Valle Inclan prize for her translation of Valeria Luiselli's The Story of My Teeth, and Among Strange Victims (Daniel Saldaña París) was a finalist in the 2017 Best Translated Book Award. Among the other authors she has translated are: Elvira Navarro (A Working Woman), Verónica Gerber Bicecci (Empty Set; Palabras migrantes/Migrant Words), and Julián Herbert (Tomb Song; The House of the Pain of Others). She is currently working on a second novel by Daniel Saldaña París and her translations of short story collection by Elvira Navarro and Julián Herbert will be published in 2020.