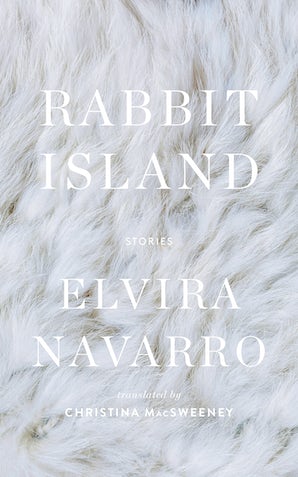 Longlisted for the National Book Award for Translated Literature

These eleven stories from one of Granta’s “Best Young Spanish-Language Novelists” combine gritty surrealism with explosive interior meditations, traversing the fickle, often terrifying terrain between madness and freedom. In the title story, a so-called “non-inventor” brings snow-white rabbits to an island inhabited exclusively by birds, with horrific results. In “Myotragus” a privileged man’s understanding of the world is violently disrupted by the sight of a creature long thought extinct. Elsewhere in these stories that map dingy hotel rooms, shape-shifting cities, and graveyards, an unsightly “paw” grows from a writer’s earlobe and a grandmother floats silently in the corner of the room.

Elvira Navarro won the Community of Madrid’s Young Writers Award in 2004. Her first book, La ciudad en invierno (The City in Winter), published in 2007, was well received by the critics, and her second, La ciudad feliz (The Happy City, Hispabooks, 2013) was given the twenty-fifth Jaén Fiction Award and the fourth Tormenta Award for best new author, as well as being selected as one of the books of the year by Culturas, the arts and culture supplement of the Spanish newspaper Público. Granta also named her one of their top twenty-two Spanish writers under the age of thirty-five. She contributes to cultural magazines such as El Mundo newspaper’s El Cultural, to Ínsula, Letras Libres, Quimera, Turia, and Calle 20, and to the newspapers Público and El País. She writes literary reviews for Qué Leer and contributions for the blog “La tormenta en un vaso.” She also teaches creative writing.

Christina MacSweeney received the 2016 Valle Inclan prize for her translation of Valeria Luiselli's The Story of My Teeth, and Among Strange Victims (Daniel Saldaña París) was a finalist in the 2017 Best Translated Book Award. Among the other authors she has translated are: Elvira Navarro (A Working Woman), Verónica Gerber Bicecci (Empty Set; Palabras migrantes/Migrant Words), and Julián Herbert (Tomb Song; The House of the Pain of Others). She is currently working on a second novel by Daniel Saldaña París.