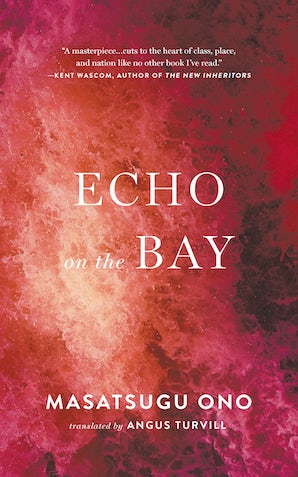 Echo on the Bay

"Cross García Márquez and Simenon and set the piece on the Sea of Japan, and you’ll have a feel for Ono’s latest… Fans of Kenzaburo Oe’s Death by Water and Haruki Murakami’s 1Q84 will enjoy Ono’s enigmatic story.” —Kirkus (starred review)

All societies, whether big or small, try to hide their wounds away. In this, his Mishima Prize-winning masterpiece, Masatsugu Ono considers a fishing village on the Japanese coast. Here a new police chief plays audience for the locals, who routinely approach him with bottles of liquor and stories to tell. As the city council election approaches, and as tongues are loosened by drink, evidence of rampant corruption piles up—and a long-held feud between the village’s captains of industry, two brothers-in-law, threatens to boil over.

Meanwhile, just out of frame, the chief’s teenage daughter is listening, slowly piecing the locals’ accounts together, reading into their words and poring over the silence they leave behind. As accounts of horrific violence—including a dangerous attempt to save some indentured Korean coal mine workers from the Japanese military police and the fate of a group of Chinese refugees—steadily come into focus, she sets out for the Bay, where the tide has recently turned red and an ominous boat from the past has suddenly reappeared.

Populated by an infectious cast of characters that includes a solemn drunk with a burden to bear; a scarred woman constantly tormented by the local kids’ fireworks; a lone communist; and the “Silica Four,” a group of out-of-work men who love to gossip—Echo on the Bay is a quiet, masterful epic in village miniature. Proof again that there are no small stories—and that History’s untreated wounds, no matter how well hidden, fester, always threatening to resurface.

Masatsugu Ono is the author of numerous novels, including Mizu ni umoreru haka (The Water-Covered Grave), which won the Asahi Award for New Writers, and Nigiyakana wan ni seowareta fune (Echo on the Bay), which won the Mishima Prize. A prolific translator from the French—including works by Èdouard Glissant and Marie NDiaye—Ono received the Akutagawa Prize, Japan’s highest literary honor, in 2015. He lives in Tokyo.

Angus Turvill was a winner of the grand prize in the Shizuoka International Translation Competition, and he has received John Dryden and Kurodahan translation awards. His translations include Masatsugu Ono's Lion Cross Point, also published by Two Lines Press, Tales from a Mountain Cave, by the great humorist and anti-militarist Hisashi Inoue, and Heaven's Wind, a bilingual collection of stories by some of Japan's finest contemporary women writers.