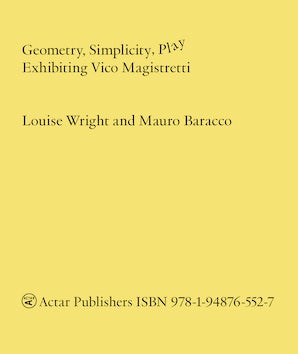 By Baracco,Mauro and Louise Wright

The book provides a reflection on the conceptual framework of Milanese architect and industrial designer Vico Magistretti, his work and relevance to issues facing designers today.

Following and extending from the Vico Magistretti-Travelling Archive exhibition at the Melbourne Design Week 2019, the book Geometry, Simplicity, Play: Exhibiting Vico Magistretti relates this exhibition to Magistretti’s design approach and theoretical thought through texts and illustrations that discuss the above exhibition installation and projects by Magistretti, from both industrial design and architecture fields. The book focused in particular to the sense of ‘conceptual simplicity’, playfulness and geometry that inform Magistretti’s work, is also part of the extended discourse that is undertaken internationally in 2020 over the centenary year of Magistretti’s birth date (1920-2006).

Ludovico Magistretti was born in Milan from a family of architects. In autumn 1939 he enrolled in the Faculty of Architecture at the Royal Polytechnic in Milan. To avoid being deported to Germany, he left Italy during his military service and moved to Switzerland, where he took some academic courses at the Champ Universitaire Italien in Lausanne. During his stay in the Swiss city he met Ernesto Nathan Rogers, the founder of the BBPR firm, who turned out to be his maestro. He returned to Milan in 1945, where he graduated in Architecture at the Polytechnic and immediately began his career working at the firm owned and run by his father.

The young architect was involved in plenty of activities and came up with lots of new ideas and proposals in the 1950s, which, in a short space of time, saw him rise to the status of one of the most brilliant exponents of the “third generation”. His work as an architect was almost totally focused on the issue of housing and living from the 1960s onwards. This is the context in which he took part in the last CIAM Congress (International Modern Architecture Congress) held in Otterlo in Netherlands in 1959.

Magistretti was one of the founding fathers of so-called Italian Design, a phenomenon which he himself described as “miraculous” and which only happened thanks to the coming together of two key players: architects and manufacturers. He began working with some exceptional manufacturers from the end of the 1960s, including Artemide, Cassina and Oluce, designing objects for them which are still “classics” of modern-day production.

His design works are displayed in the MoMA, Victoria & Albert Museum in London, Die Neue Sammlung Museum in Munich among others. After he passed away in September 2006, his studio, where Fondazione studio museo Vico Magistretti is located, was converted into a museum devoted to the study of his work and to promoting it.