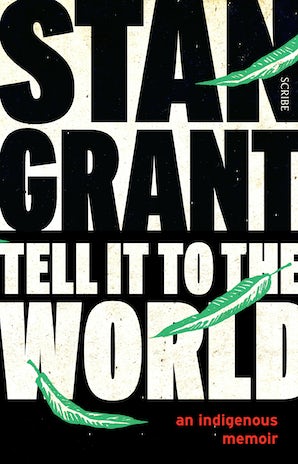 Tell It to the World

An extraordinarily powerful and personal meditation on race, culture, and identity.

As an Aboriginal Australian, Stan Grant has had to contend with his country’s racist legacy all his life. Born into adversity, he found an escape route through education and the writing of James Baldwin, going on to become one of Australia’s leading journalists.

As a correspondent for CNN, he travelled the world, covering conflicts everywhere, from Baghdad to North Korea. Struck by how the human spirit can endure in the face of repression, he found the experiences of individuals he met spoke to him of the undying call of family and homeland. In the stories of other dispossessed peoples, he saw that of his own.

In Tell It to the World, Grant responds to the ongoing racism that he sees around him. He writes with passion and striking candor of the anger, shame, and hardship of being an indigenous man. In frank, mesmerizing prose, Grant argues that the effects of colonialism and oppression are everyday realities that still shape our world.