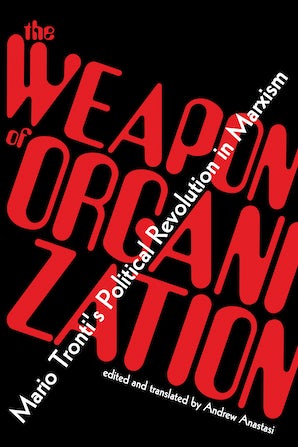 The Weapon of Organization

By Mario Tronti Edited and translated by Andrew Anastasi

Mario Tronti was the principal theorist of the radical political movement of the 1960s known in Italy as operaismo and in the Anglophone world as Italian workerism, a current which went on to inform the development of autonomist Marxism. His “Copernican revolution”—the proposal that working class struggles against exploitation propel capitalist development, which can only be understood as a reaction that seeks to harness this antagonism—has inspired dissident leftists around the world.

Tronti’s influence as a theorist thus already reaches far beyond Italy to activists and writers working in different sectors on different problems historically and geographically. While his imposing and acclaimed Workers and Capital has only recently appeared in English translation, Tronti has influenced many of the most creative social and political theorists of our time.

Antonio Negri and Michael Hardt have long acknowledged the influence of Tronti on their thinking, drawing especially on his inversion of strategy and tactics in their influential collaborations. Tronti’s work in the 1960s also furnished important building blocks for a Marxist feminist critique of unwaged labor—as developed by Mariarosa dalla Costa, Silvia Federici, and many others working on social reproduction theory—as Tronti showed how capitalist control extends beyond the factory to all of society. Fred Moten and Stefano Harney have echoed Tronti’s calls for a radical antagonism “within and against” institutions and the state.

The Weapon of Organization is a crucial introduction to Tronti, presenting a variety of never-before-translated texts—personal letters, public talks, published articles. With an incisive and provocative introduction that situates Tronti and highlights his relevance to contemporary political struggle, Anastasi translates and restores key writing from the birth of Italian operaismo—days of street fighting and theorizing for a renewed age of revolution.Tronti’s goal, Anastasi writes, was not to become a revered thinker but to participate in the destruction of capitalist society.

is a philosopher and politician. In the 1960s he was among the founders of operaismo (Italian “workerism”), a heterodox school of Marxist thought, and later he played a leading role in the Italian Communist Party. He has been a newspaper editor, university professor, president of the Centro per la Riforma dello Stato, and Senator of the Italian Republic. He is the author of Workers and Capital and many anthologized essays as well as other books in Italian.

is a member of the Viewpoint Magazine editorial collective and a doctoral candidate in Sociology and Critical Theory at the Graduate Center, City University of New York. He is the translator of numerous works from Italian as well as the editor of The Young Mario Tronti, a dossier on the early philosophical and political development of one of the founders of Italian operaismo . His doctoral research investigates relations between New Left movement organizations and the U.S. capitalist state during the 1960s and 1970s, focusing on the War on Poverty and its afterlives. Anastasi has worked in public high schools and colleges for the past decade and currently teaches courses in political sociology, social movements, and social theory at Queens College, City University of New York.