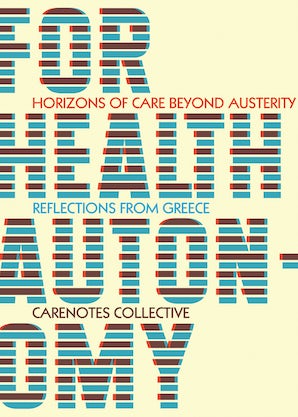 Horizons of Care Beyond Austerity—Reflections from Greece

“Here, the treatment of pathologies—such as cancers or viruses—is considered as important as dismantling the causes of pathologies, including the social problems of debt, homelessness, police violence, and isolation. We must grasp how the de-individualization of care, what we might refer to as the communization of care, is central to fighting state and capital’s racialized and gendered forms of abandonment.”

For Health Autonomy: Horizons of Care Beyond Austerity—Reflections from Greece explores the landscape of care spaces coordinated by autonomous collectives in Greece, including clinics, social spaces for health, social kitchens, and safe spaces liberated from the state and capital. The significance of autonomous spaces is intensified in the very moment the state, capital, and their complicit institutions attempt to penetrate their power via austerity and state violence. In tandem with the broader anticapitalist movement, these spaces have ruptured the legitimacy of the state and capital, and reclaimed care beyond the limits of the biomedical, nonprofit, and capitalist frameworks.

The experience of Greek autonomous care spaces encapsulates care within, as well as beyond, the biomedical; where addressing pathologies, such as cancers or colds, are as important as dismantling the causes of the pathology, including debt, homelessness, police violence, and social isolation. The collected essays grasp how emotional and physical distress is preventable—where ensuring access to antibiotics, vaccines, or herbal remedies is as relevant as liberating unused space for housing or de-policing a neighborhood. The subjects of this collection include a network of users of psychosocial services, defending their right to autonomy within mental healthcare systems; a healthcare center organized and maintained by an anarchist collective; a worker’s clinic founded by a coalition of factory workers and healthcare solidarity activists; among others.

The Greek contribution to autonomous care work emancipates labor, space, and resources towards a form of life that sustains the bodies and well-being of the collectives directly involved in this process, and the broader network of autonomous communities that rely on such care spaces to reproduce other modes of noncapitalist life. Efforts to defend and expand the very elements necessary for the survival of our bodies and ecology are in tandem with efforts to rupture from hierarchies, profits, and institutionalized singularities. For Health Autonomy is a powerful collection of first-hand accounts of concrete alternatives that are replacing our need for police and prisons based on the collective power of communities and care workers. These reflections have merged from within and beyond healthcare institutions.

Intensifying inequality and violence have heightened the need to deepen our capacity to resist, offer concrete alternatives, and reproduce ourselves in the process. CareNotes Collective organizes directly on this terrain and seeks to record and amplify the experiences of those struggling for health autonomy in their own communities. The challenge is to imagine how to expand these practices while defending our communities from the risks of cooption, state violence, and emotional trauma as well as financial domination. CareNotes is a collective of care workers who are organizing for health autonomy. They are committed to sharing experiences and analysis from autonomous care practices resisting the violence of the state and capitalist life. The editorial collective functions anonymously, without any grant funding, or any affiliation with academic/NGOs/foundations.