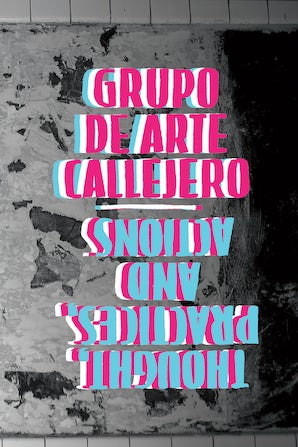 Grupo de Arte Callejero: Thought, Practices, and Actions tells the profound story of social militancy, popular rebellion, and art in the tumultuous decades of Argentina’s recent past—and foretells the subversive arts of rebellion for an unwritten future. For the artist collective Grupo de Arte Callejero (Group of Street Artists), there is no separation between social art and social movements. Militancy and art unite in the anonymous, collective, everyday spaces and rhythms of life.

For over two decades, Grupo de Arte Callejero has participated in the wave of denunciations of genocide and disappearances during the military junta, the social rebellions of the 2001 financial crisis, neoliberal austerity plans, teachers’ strikes, and Indigenous protests. A critical reflection and collection of their work, Thought, Practices and Actions offers profound insight into what was done and what remains to be done in the social fields of art and revolution.

Grupo de Arte Callejero formed in Buenos Aires, Argentina in 1997 out of a need to create a space where the artistic and political could be part of a single means of production. Because of this, their work blurs the boundaries between militancy and art, and develops confrontational forms and strategies that operate within determined contexts: the street, the occupation, the demonstration. From the beginning, their work has searched for a space for visual communication that would escape the traditional circuit of exhibition, taking as its central axis of production the appropriation of public spaces. A large part of their work is anonymous in character, which allows for the continued elaboration of these practices and methodologies by like-minded individuals or groups. Many of their projects have emerged as collective constructions with political movements, groups, and individuals, creating a unique dynamic of production that is in permanent transformation due to this constant exchange and putting into political practice.

Mareada Rosa is a translation collective based in Michigan interested in bringing critical work in the areas of politics and culture from North and South America into English. Its members are Catalina Esguerra, Laura Herbert, Hilary Levinson, María Robles, Brian Whitener and Silvina Yi.