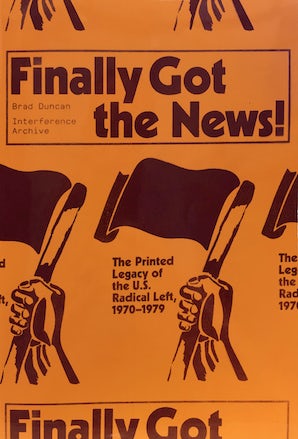 Finally Got the News

Finally Got the News uncovers the hidden legacy of the radical Left of the 1970s, a decade when vibrant social movements challenged racism, imperialism, patriarchy, and capitalism. It combines written contributions from movement participants with original printed materials—from pamphlets to posters, flyers to newspapers—to tell this politically rich and little-known story.

The dawn of the 1970s saw an absolute explosion of interest in revolutionary ideas and activism. Young people radicalized by the antiwar movement became anti-imperialists, veterans of the Civil Rights and Black Power movements increasingly identified with communism and Pan-Africanism, and women were organizing for autonomy and liberation. While these movements may have different roots, there was also an incredible overlapping and intermingling of activists and ideologies.

These diverse movements used printed materials as organizing tools in every political activity, creating a sprawling and remarkable array of printing styles, techniques, and formats. Through the lens of printed materials we can see the real nuts and bolts of revolutionary organizing in an era when thousands of young revolutionaries were attempting to put their beliefs into practice in workplaces and neighborhoods across the U.S.

Brad Duncan is an activist and a union library worker who has been collecting printed materials related to social protest for twenty years. His work as a collector focuses on the radical movements and liberation struggles of the sixties and seventies, some of which can be seen on his popular blog, The R. F. Kampfer Revolutionary Literature Archive. In 2014 his archive was the focus of an exhibition titled “Power to the Vanguard: Original Printed Materials from Revolutionary Movements Around the World, 1963–1987” at Trinosophes in Detroit, Michigan.

The mission of Interference Archive is to explore the relationship between cultural production and social movements. This work manifests in an open stacks archival collection, publications, a study center, and public programs, all of which encourage critical and creative engagement with the rich history of social movements.

Kazembe Balagun is the North American Project Manager for the Rosa Luxemberg Stiftung in New York. He contributed “We Be Reading Marx Where We From: Socialism and the Black Freedom Struggle” to the book Imagine: Living in a Socialist USA (Harper Perennial, 2014).

Dan Berger teaches Comparative Ethnic Studies at the University of Washington Bothell, is an antiprison activist, and the author of Captive Nation: Black Prison Organizing in the Civil Rights Era (UNC Press, 2014).

Johanna Brenner is an Emeritus Professor of Women’s Studies/Sociology at Portland State University in Portland, Oregon. She is the author of Women and the Politics of Class (Monthly Review Press, 2000) and is a contributor to various left publications, such as Against the Current, Jacobin, Socialist Register, and Socialist Studies.

Over the past thirty years, Stephanie Browner has worked as Director of the Test Kitchen for Vegetarian Times magazine, as well as Managing Director of the Man Ray Trust Archive, where she produced traveling exhibitions including “Unconcerned But Not Indifferent,” which toured nine museums in Europe and Japan.

Silvia Federici is a leading scholar in the autonomous feminist Marxist tradition. She was involved with the Wages For Housework campaign and the Midnight Notes Collective. She is the author of Caliban and the Witch: Women, the Body and Primitive Accumulation (Autonomedia, 2004) and Revolution at Point Zero: Housework, Reproduction, and Feminist Struggle (Common Notions/PM, 2012).

Bill Fletcher, Jr. is the former president of TransAfrica Forum, a Senior Scholar with the Institute for Policy Studies, and a veteran labor movement activist. He was a founding member of the Black Radical Congress.

Emily K. Hobson is Assistant Professor of History and of Gender, Race, and Identity at the University of Nevada, Reno. She is the author of Lavender and Red: Liberation and Solidarity in the Gay and Lesbian Left (University of California Press, 2016).

Dan La Botz was a founding member of Teamsters for a Democratic Union and is the author of many books on labor politics including Made in Indonesia: Indonesian Workers Since Suharto (South End Press, 2001), Cesar Chavez and La Causa (Pearson Longman, 2006), and What Went Wrong? The Nicaraguan Revolution: A Marxist Analysis (Brill, 2016). For twenty years he was the editor of Mexican Labor News and Analysis and is a coeditor of New Politics.

Elly Leary is former member of Proletarian Unity League and a longtime autoworker activist and union negotiator. She is a regular contributor to Monthly Review on labor politics and history and is a member of Freedom Road Socialist Organization/Organización Socialista del Camino para la Libertad.

Akinyele Umoja is a Professor and Department Chair of the Department of African American Studies at Georgia State University. He is a founding member of the New Afrikan People’s Organization and the Malcolm X Grassroots Movement and the author of We Will Shoot Back: Armed Resistance in the Mississippi Freedom Struggle (NYU Press, 2013).

Ethan Young is a former editor with CrossRoads magazine, Monthly Review Press, and Cuba Update (Center for Cuban Studies). He was a regular writer for the Guardian (NY) and Frontline (Oakland, newspaper of the group Line of March), and is a moderator of the listserv Portside.org.