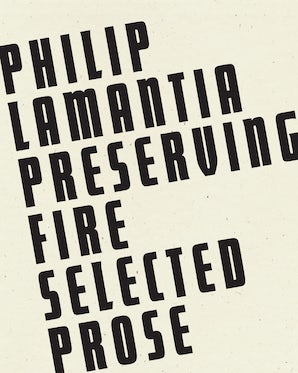 “Philip was a visionary like Blake, and he really saw the whole world in a grain of sand.” —Lawrence Ferlinghetti

“An inspired consciousness set at full tilt in raging protest, kisses, prayers, blessings, and outraged demands. All from the deepest silence and farthest travel.” —Michael McClure

Preserving Fire recounts the life and thought of the Surrealist, Beat Generation, and San Francisco Renaissance poet Philip Lamantia through his fugitive prose works. Ranging from poetry to politics to mythology to dance, from manifestos to travelogues to wartime declarations of conscientious objection, these writings, expertly collected by friend and longtime City Lights editor Garrett Caples, offer a dynamic picture of Lamantia’s multifaceted intellectual life and the artistic movements he helped shape.

Garrett Caples is the author of many books, most recently Power Ballads and Retrievals. He is the co-editor of The Collected Poems of Philip Lamantia and is an editor at City Lights Books, where he curates the Spotlight Poetry Series.

Garrett Caples is the author of Power Ballads (Wave Books, 2016), Retrievals (Wave Books, 2014), The Garrett Caples Reader (1999), Complications (2007), and Quintessence of the Minor (Wave Books, 2010). He is the editor of Preserving Fire: Selected Prose (Wave Books, 2018) by Philip Lamantia, and the co-editor of The Collected Poems of Philip Lamantia (2013), Particulars of Place (2015) by Richard O. Moore, and Incidents of Travel in Poetry: New and Selected Poems (2016) by Frank Lima. He is an editor at City Lights Books and curates the Spotlight Poetry Series there. He was also a contributing writer to the San Francisco Bay Guardian. He has written articles and blogged for the Poetry Foundation and occasionally blogs for blogcitylights.com. He has a Ph.D. in English from the University of California, Berkeley, and lives in San Francisco.