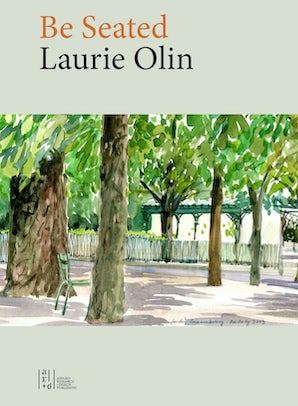 Laurie Olin’s interest in public outdoor seating in parks and civic spaces revolves around two poles: the first is a concern for aspects of the ordinary in our settings and actions, the apparatus and effects of the quotidian in our individual lives and experience; the other is the utility of public seating in the conduct and potential of our role as citizens and the establishment of place and community. A not inconsiderable aspect of both is the engendering of pleasure. In a democracy we are expected to fulfill two potentials – those of private citizen and contributing member of a community. When sitting on a bench or chair in a park or plaza we inevitably participate in the life of a particular space, city, and society while simultaneously pursuing our own life with its demands and aspirations. Chairs and benches in their many varieties and situations are the setting (pun intended) for profoundly simple, albeit important, and largely unnoticed aspects of our lives.

Humans are gregarious and habitually love to be together, often sitting about for hours at a time. Commonly this is for dining, whether singly or in groups, large or small. We sit in public places, in private ones, indoors and out, often doing nothing except watching the world. Over the course of centuries many devices have been developed for such purposes. Not a comprehensive history or survey, this is an appreciation derived from frequent, often iterative personal observation and constant professional engagement with the topic of seating, sometimes in gardens, but more particularly in public and civic environments.

The book consists of a series of essays that begin with the author’s personal discovery of public seating. An ‘ah hah’ moment as a young architect visiting Paris and his early experience as a designer is followed by a brief history of the evolution of public space and seating in the West. This is followed by an account of some of his experiments as a landscape architect, and the theory, craft, and role of seating in a number of prominent civic places his firm and others have designed in the past four decades. Along the way there are reflections on the author’s interest in chairs, seating, public space, and aspects of the profession of landscape architecture.

Accompanying the essays there are sketches, and watercolors made by Olin over time while travelling or working that weren’t originally intended as book illustrations. Some are quick, hasty notes of something observed; others are more careful studies with, on occasion, measurements. Some were made leisurely while enjoying a felicitous moment or place, while others record the author puzzling through a particular design problem. Each in some way exemplifies aspects of the essays helping to articulate or sharpen the author’s insights and point of view – those of a designer, not a historian or critic. They offer an alternative presentation of the topics raised, and a dialogue between writing and image – whether one of contrast, or at times, contrast.