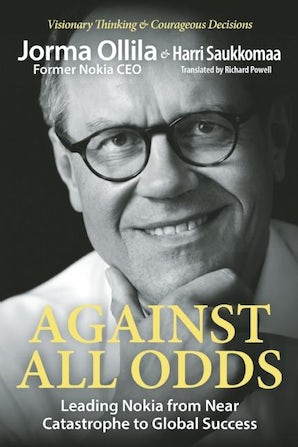 Leading Nokia from Near Catastrophe to Global Success

By Jorma Ollila and Harri Saukkomaa Translated by Richard Powell

In this compelling memoir, Nokia's legendary CEO Jorma Ollila presents a riveting account of the inner workings of the company that created the global mobile revolution. CEO from 1992 to 2006, Ollila led Nokia from near catastrophe to become the world's leading mobile phone manufacturer. He built a company where visionary thinking and courageous decisions were combined with exceptional creativity and first-rate engineering, leading to phenomenal growth.

Follow Ollila's personal and professional journey, where you'll learn about the fine line between stratospheric success and disastrous failure. His stories are filled with lessons about the nature of leadership, the importance of shared values, and the need for strategic thinking.

Ollila offers a uniquely clear picture of life as a CEO, with many insights into how business is conducted at the highest levels. He is especially upfront about working with his executive and management teams as well as encounters with figures such as Bill Gates, Steve Jobs, and George Soros. He offers poignant as well as illuminating stories of hair-raising risks and huge successes, but also of poor judgment and bad decision-making.

Jorma Ollila was Nokia's CEO from 1992 to 2006 and Chairman from 1999 to 2012. He was Chairman of Royal Dutch Shell from 2006 to 2015 and Chairman of the European Round Table of Industrialists from 2005 to 2009. He is currently an Advisory Partner at investment bank Perella Weinberg Partners. He is an Honorary Fellow of the London School of Economics and holds honorary doctorates from the University of Helsinki, the Helsinki University of Technology, and the University of Vaasa.

Harri Saukkomaa, chairman and founder of the public relations firm Tekir, is a distinguished journalist, entrepreneur, executive and author of several nonfiction books.