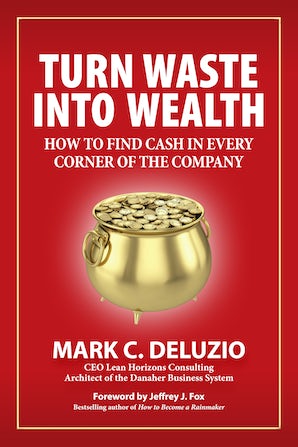 How to Find Cash in Every Corner of the Company

Cash is lying around everywhere in companies. It's in warehouses and on shelves, hiding in plain sight as inventory. It litters administrative offices, disguised as incorrect invoices, late billings, sloppy requests from salespeople. It sits in company lobbies waiting for sales calls to start. All that cash is retrievable - available for re-investment. Turn Waste into Wealth will help you get that cash by turning your organization into a Lean company.

Mark DeLuzio, principle architect of the vaunted Danaher Business System that has led companies to world-class performance, presents hard-hitting advice and numerous case histories that will help you make your company Lean. You'll learn: Why Lean is the modern way to run any organization; What you must do to insure a successful Lean transformation; Lean accounting practices that promote Lean behaviors; How to identify and deal with Lean naysayers; Why LEAN does not mean "Less Employees Are Needed"; What and why to benchmark; The Lean formula for setting prices; How to deploy strategy in a Lean environment.

Great companies continuously improve everything they do to increase shareholder returns. If you're new to lean or already using Lean practices, Turn Waste into Wealth will help you make your company great.

Mark DeLuzio is the CEO of Lean Horizons Consulting. Prior to founding Lean Horizons, he was Corporate Vice-President of the Danaher Corporation, where he was the principle architect of the vaunted Danaher Business System, the primary reason for that company's decades-long, world-class performance. Mark is the pre-eminent thought leader in the Lean industry, noted for numerous Lean innovations. In 2007 he was inducted as a Life Member of the Shingo Prize Academy (the Lean Hall of Fame). He is a popular speaker sought by corporations, conferences, and noted higher-learning institutions.

Jeffrey J. Fox is the author of twelve books, including the bestsellers How to Become a Rainmaker and How to Become CEO. Founder of Fox and Company, he works with companies such as General Electric, IBM, and Ametek, among others. He is a graduate of Harvard Business School.