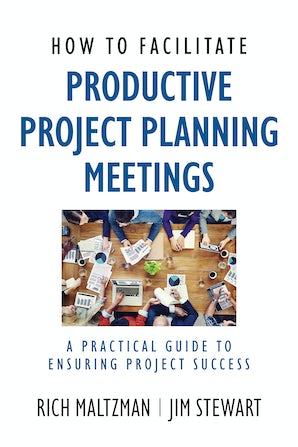 By Rich Maltzman and Jim Stewart

This practical guide to facilitating planning meetings will enable you to effectively jump-start your projects and lead to success.

Rigorous planning is vital to your project execution and success. Projects are often multifunctional, requiring input from various stakeholders. Project planning often tends to be done piecemeal or not at all, often leading to missing and/or incomplete information and correspondingly poor results. This book will show you how to do it right.

How to Facilitate Productive Project Planning Meetings is a guide to help you plan your projects by showing you how to effectively facilitate productive face-to-face kickoff sessions (both in person and virtual) and ongoing planning meetings. Effective planning meetings will help you not only develop key artifacts but also provide continuous team building. You’ll also learn about the impacts of culture (organizational and global) on team dynamics and discover methods to ameliorate these impacts.

A case study of building a sustainable house will help you understand the concepts and grasp the terminology. The book will also feature dozens of illustrative stories (from the authors as well as other practicing project managers) that will illustrate meeting techniques that went well (or not so well). Numerous templates, sample schedules, and checklists round out the value of this book in helping you facilitate effective meetings.

Rich Maltzman, PMP, has been an engineer since 1978 and a project management supervisor since 1988. He has co-authored several books, including the Cleland Award Winner Green Project Management, and has developed PMP exam prep courseware. Rich has consulted and taught at several universities in the United States and China and has presented at international PMI and IPMA conferences throughout the world. Jim Stewart, PMP, CSM, is a principal at JP Stewart Associates engaged in project management consulting, training, and mentoring. He has over twenty years of experience working with companies such as IBM, GTE/Verizon, and Fidelity Investments. Jim has taught at Brandeis, UMass Boston, Bentley, and Northeastern and is on the advisory board at the e-learning company MindEdge. Jim holds a BA from Boston University.