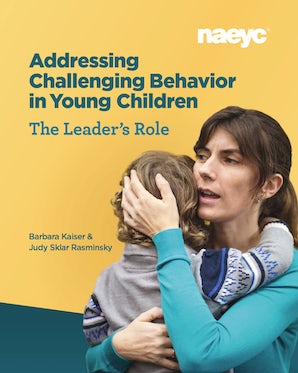 Publisher: National Association for the Education of Young Ch

By Barbara Kaiser and Judy Rasminsky

There is no single script or one right answer. But with the realistic and practical strategies in this book, directors and administrators of early childhood programs and principles of schools can develop the skills to build a team that works together to support all children and staff. Topics include

Your support and guidance can make all the difference in the ability of teachers, children, families, and the program itself to flourish.

Barbara Kaiser is the coauthor of Challenging Behavior in Young Children (now in its 4th edition) and Meeting the Challenge. She has taught at Acadia University in Nova Scotia and at Concordia University and College Marie-Victorin in Montreal, Canada, and presented workshops, keynote speeches, and webinars on challenging behavior in the United States, Canada, and throughout the world. Barbara acted as chief consultant for the Mr. Rogers’ Family Communications project Challenging Behaviors: Where Do We Begin? and for Facing the Challenge, an instructional DVD produced by the Devereux Center for Resilient Children. Barbara also developed an intervention to address youth violence; created webinars and guides on bullying for the Nova Scotia Department of Education; and founded and directed two early childhood centers and an after-school program in Montreal. She has given webinars on leadership and on supporting children, families, and staff returning to school and child care programs during the COVID-19 pandemic. Barbara has an MA from McGill University.

Judy Sklar Rasminsky is a freelance writer who specializes in education and health. With coauthor Barbara Kaiser, she has written Challenging Behavior in Young Children and Challenging Behavior in Elementary and Middle School, which both earned Texty awards from the Text and Academic Authors Association; and Meeting the Challenge, a bestseller selected as a comprehensive membership benefit by NAEYC. In addition, the team has authored a guide for Canadian parents, The Daycare Handbook, and a fact book for educators on HIV/AIDS. Judy’s work has appeared in publications such as the Reader’s Digest and the Los Angeles Times, been anthologized in textbooks, and honored by the National Institutes of Health. For many years an editor and researcher for book publishers in New York, London, and Montreal, she holds a BA from Stanford University and an MA from Columbia University.