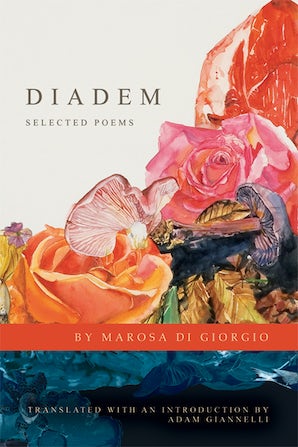 Marosa di Giorgio has one of the most distinct and recognizable voices in Latin American poetry. Her surreal and fable-like prose poems invite comparison to Franz Kafka, Julio Cortázar, or even contemporary American poets Russell Edson and Charles Simic. But di Giorgio's voice, imagery, and themes—childhood, the Uruguayan countryside, a perception of the sacred—are her own. Previously written off as "the mad woman of Uruguayan letters," di Giorgio's reputation has blossomed in recent years. Translator Adam Giannelli's careful selection of poems spans the enormous output of di Giorgio's career to help further introduce English-language readers to this vibrant and original voice.

Marosa di Giorgio was born in Salto, Uruguay, in 1932. Her first book Poemas was published in 1953. Also a theater actress, she moved to Montevideo in 1978, where she lived until her death in 2004.

Marosa di Giorgio was born in Salto, Uruguay, in 1932. Descended from Italian immigrants of Tuscan origin, she and her sister Nidia were raised as Catholics in the countryside. She published her first book, Poemas, in 1953. In the 1950s and 60s she worked in the theater and participated as an actress in almost thirty productions. Later, drawing on her background in theater, she gave dramatic recitals of her poems. In 1978, after the death of her father, the family relocated to Montevideo, where she lived until she died of cancer in 2004. She never married or had children.

Like Walt Whitman, di Giorgio expanded the same work throughout her career: Los Papeles Salvajes (The Wild Papers, 2008), her collected poetry, which unites fourteen books. Since her poems inhabit the same imaginative world, they can be read as one long meditation, which di Giorgio described as a forest in which she planted more trees. In 2008, Adriana Hidalgo, an editorial house in Buenos Aires, published the collection in one single volume.

Translator Adam Giannelli is a graduate of Oberlin College and the University of Virginia, where he was a Hoyns Fellow. His poems and translations of Spanish and Italian poetry have appeared or are forthcoming in New England Review, Kenyon Review, Field, Southwest Review, Quarterly West, Colorado Review, Two Lines, Pleiades, The FSG Book of Twentieth-Century Italian Poetry, and elsewhere. He is the editor of a book of critical essays: High Lonesome: On the Poetry of Charles Wright (Oberlin CP, 2006). He has been nominated for a Pushcart Prize, and has received fellowships from the Sewanee Writers’ Conference, Virginia Center for the Creative Arts, Ucross Foundation, and the Djerassi Resident Artists Program.