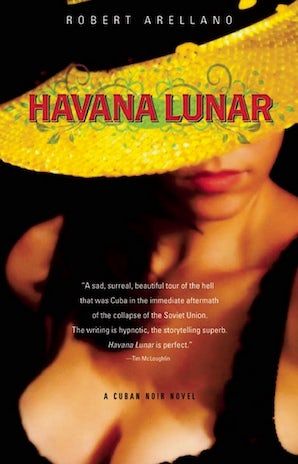 "A sad, surreal, beautiful tour of the hell that was Cuba in the immediate aftermath of the collapse of the Soviet Union. The writing is hypnotic, the storytelling superb. Havana Lunar is perfect."
--Tim McLoughlin, author of Heart of the Old Country, editor of Brooklyn Noir

"Written with passion and vision and with a clear, unflinching eye, Robert Arellano's Havana Lunar breaks new ground. It is not a Cuban American novel but a Cuban novel written in English. In it the Cuban underworld of chulos and jineteras is revealed and the uber-world of political bosses and apparatchiks unmasked. I am certain that Havana Lunar will find a wide and enthusiastic readership."
--Pablo Medina, author of The Cigar Roller

"Robert Arellano's book is a hypnotic trip into another world, a place we are hardly ever allowed to go--Castro's Cuba. Without polarizing political pontifications or moral insertions of right and wrong, Arellano takes us straight into a country where people survive, combining resilience with ingenuity to keep the best of what works while simply sneaking around the things that don't. It's the way of life for most people who live under dictatorships--and yet the joy and beauty of this novel is how effortlessly he weaves his characters into our lives...It's as if Balzac meets Philip K. Dick, for Arellano's Cuba is a whole other planet to us, one we definitely need to know more about..."--Abraham Rodriguez, author of South by South Bronx

One hungry, hallucinatory night in the dark heart of Havana, Mano Rodriguez, a young doctor with the revolutionary medical service, comes to the aid of a teenage jinetera named Julia. She takes refuge in his clinic to break away from the abusive chulo who prostituted her, and they form an unlikely allegiance that Mano thinks might save him from his twin burdens: the dead-end hospital assignment he was delegated after being blacklisted by the Cuban Communist Party and a Palo Monte curse on his love life commissioned by a vengeful ex-wife. But when the pimp and his bodyguards come after Julia and Mano, the violent chain-reaction plunges them all into the decadent catacombs of Havana's criminal underworld.

Inspired by fifty years of Cuban literary noir, from Cold Tales by Virgilio Piñera to Reinaldo Arenas' Before Night Falls, Robert Arellano's Havana Lunar intertwines an insider testimony on the collapse of socialist Cuba with a psychological mystery.

Robert Arellano's parents fled Havana in 1960. He has been working on Havana Lunar since 1992 when, as a student in Brown University's graduate writing program, he visited Cuba on a research fellowship. He has returned ten times, chronicling the Revolution in journalism, essay, and song. He is the author of two novels, Fast Eddie, King of the Bees and Don Dimaio of La Plata.