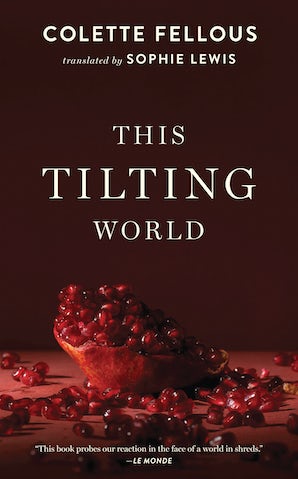 On the night following the terrorist attack that killed eighty-three tourists on the beach at Sousse, a woman sits facing the sea and writes a complicated love letter to her homeland, Tunisia, which she feels she must leave forever. She also writes of her personal tragedies—the deaths of her father, a quiet man, and of another lifelong friend, who just weeks ago died at sea, having forsaken the writing that had given his life meaning.

Part of a trilogy on the history of Tunisia’s Jewish community, Fellous’s story nods to Proust and encompasses a multitude of colorful portraits, sweeping readers onto a lyrical journey from Tunisia to Paris to a Flaubertian village in Normandy, full of the voices of loved ones now silent.

Written with echoes of Roland Barthes’s gorgeous fragmentary texts, such as A Lover’s Discourse and Camera Lucida, Fellous’s creative memoir is at once a political and cultural portrait of a region that has sat at the center of world history for millennia, as well as a search into her own memory, emotions, and family history.

The author of more than twenty novels, including Aujourd’hui (2005), for which she received the Prix Marguerite Duras, and La Préparation de la vie (2014), in which she pays homage to her mentor Roland Barthes, Colette Fellous lives between France and Tunisia. A former publisher, and a radio producer for France Culture, she is also a photographer. This Tilting World is her first book published in English.

Sophie Lewis has been translating fiction and other literature from French since graduating from Oxford University in 2004. Following a stay in Rio de Janeiro, from 2011 to 2015, she began translating from Portuguese. Her translations include works by Stendhal, Jules Verne, Marcel Aymé, Violette Leduc, Emmanuelle Pagano, Natalia Borges Polesso, and João Gilberto Noll. She has pursued a career in publishing alongside translation, running the UK office at Dalkey Archive Press, then as Senior Editor at And Other Stories publisher, and currently as fiction editor at the Folio Society.