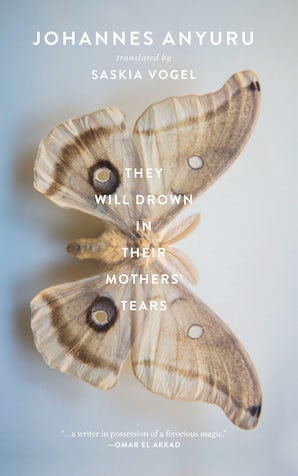 They Will Drown in Their Mothers' Tears

In the midst of a terrorist attack on a bookstore reading by Göran Loberg, a comic book artist famous for demeaning drawings of the prophet Mohammed, one of the attackers, a young woman, has a sudden premonition that something is wrong, changing the course of history. Two years later, this unnamed woman invites a famous writer to visit her in the criminal psychiatric clinic where she’s living. She then shares with him an incredible story—she is a visitor from an alternate future.

Despite discrepancies that make the writer highly skeptical, he becomes increasingly fascinated by her amazing tale: in her dystopian future, any so-called “anti-Swedish” citizens are forced into a horrific ghetto called The Rabbit Yard. As events begin to spiral and the author becomes more and more implicated in this woman’s tale, he comes to believe the unbelievable: she’s telling the truth.

A remarkably intense, beautifully wrought tale that combines the ingenuity of speculative fiction with the difficulties of today’s harsh political realities, They Will Drown in Their Mothers’ Tears is the groundbreaking, award-winning work from the bestselling Swedish-Ugandan author Johannes Anyuru. With echoes of Guantanamo Bay, Abu Ghraib, the Charlie Hebdo tragedy, and anti-immigrant hysteria, this largest and most complex novel from an already celebrated poet, author, and spoken word artist catapults him to the front ranks of world writers.

Johannes Anyuru (b. 1979) is a poet, novelist, and playwright. He debuted in 2003 with the critically acclaimed collection of poems Only The Gods Are New. His second book, a memoir entitled A Storm Blew in From Paradise (2012) was based on his father's life. It received rave reviews and was awarded several prestigious literary prizes. They Will Drown in Their Mothers' Tears is his most recent book, and was awarded the August Prize and film rights have been acquired by Momento Film. Anyuru's work has been likened to a mix between Nobel Laureate Thomas Tranströmer and a hip-hop MC.

Saskia Vogel has written on the themes of gender, power, and sexuality for publications such as Granta, The White Review, The Offing, and The Quietus. Her translations include work by leading female authors, such as Katrine Marcal, Karolina Ramqvist, and the modernist eroticist Rut Hillarp. Vogel’s debut novel, Permission, appeared in 2019 in English, as well as Spanish and Swedish translations.