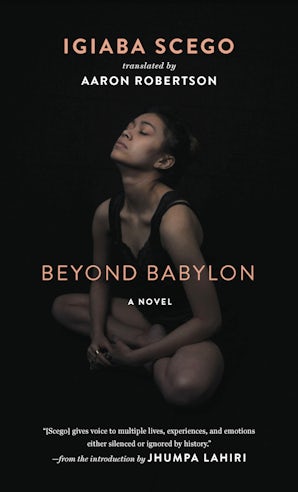 An epic spread across three nations, Beyond Babylon casts a probing, endlessly perceptive eye on the lasting effects of traumas both national and personal. Telling the engrossing lives of two half-sisters who meet coincidentally in Tunisia, their mothers, and the elusive father who ties all their stories together, Igiaba Scego’s virtuosic novel spreads thickly over Argentina’s horrific dirty war, the chaotic final years of Siad Barre’s brutal dictatorship in Somalia—which ended in catastrophic civil war—and the modern-day excesses of Italy’s right-wing politics.

United by the Italian government’s attempts to establish authoritarian politics in Somalia, Argentina, and at home, Scego’s kaleidoscopic plot investigates deep questions about our complicity in the governments that we often feel powerless to affect. In its myriad characters, locations, and languages, it brings new definition to identity in a fast-changing world of migrants and political upheaval. Most of all, Scego’s five poignant lives anchor this sprawling work as they fight to build family ties while overcoming past violations, including governmental torture and sexual assault. A masterwork equally as adept with the lives of nations as those of human beings, Beyond Babylon brings much-needed insight, compassion, and understanding to our turbulent world.

Igiaba Scego, born in Rome in 1974 to a family of Somali origins, is a writer and journalist. She is the author of numerous works of fiction and nonfiction, and her memoir La mia casa è dove sono won Italy’s prestigious Mondello Prize. She is a frequent contributor to the magazine Internazionale and the supplement to La Repubblica, Il Venerdì di Repubblica.

Jhumpa Lahiri received the Pulitzer Prize in 2000 for Interpreter of Maladies, her debut story collection. She is also the author of The Namesake, Unaccustomed Earth, and The Lowland, a finalist for both the Man Booker prize and the National Book Award in fiction.

Aaron Robertson has written for various publications including The New York Times, The Nation, n+1, The Los Angeles Review of Books, and more, and he is currently an editor at Literary Hub. He won a 2018 PEN/Heim grant for his translation of Igiaba Scego's Beyond Babylon.