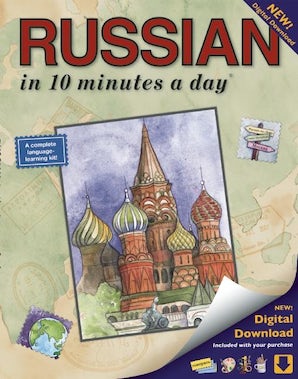 RUSSIAN in 10 minutes a day

“RUSSIAN in 10 minutes a day” is a complete, hands-on language learning experience! Interactive computer Sticky Labels, Flash Cards and special activities add a fun twist and you’ll learn faster than ever! Whether you’re exploring St. Petersburg, marveling at the architecture in Moscow, or taking a journey on the Trans-Siberian Railway, all your language needs are covered. This book/software combo has everything you’ll need for your adventures in Russia!

Kristine K. Kershul blends her experience as a teacher, world traveler and language scholar to create a playful, innovative way to learn and use a new language.

Teacher: As an expert linguist, Kristine spent ten years teaching German at universities in the United States and in Europe.

World Traveler: An adventurous spirit, Kristine has explored more than 100 countries, from Bhutan to Zimbabwe, and almost every exotic locale in between. She understands the problems that all travelers encounter, regardless of which country they are visiting. She knows first-hand how languages can open doors to new adventures, new friends and different cultures.

Language Scholar: Kristine completed her undergraduate and graduate studies while living in Heidelberg, Germany. She then received a second Master's Degree from the University of California in Santa Barbara and subsequently, did her Doctoral studies in Medieval German Languages and Literature. In addition to German, she also speaks a number of other languages ranging from Arabic to Swahili.

A Colorful Background: Kristine's fascination for languages began as a child growing up in a tri-lingual household in Oregon, where Croatian, Danish and English were spoken.

Kristine's natural gift for languages opened doors outside the academic world. She worked as a bilingual travel guide in Europe and later, as a translator at the U.S. Embassy in Germany.

On A Personal Note: Kristine's passion for travel, foreign languages and new cultures continues to take her around the world. One never knows where she'll venture to next - Namibia, Laos or Guyana. Kristine is a licensed pilot, a certified diver and an avid downhill skier. She enjoys competitive horseback riding and playing the piano. She makes her home in both Seattle, Washington and in Cape Town, South Africa.