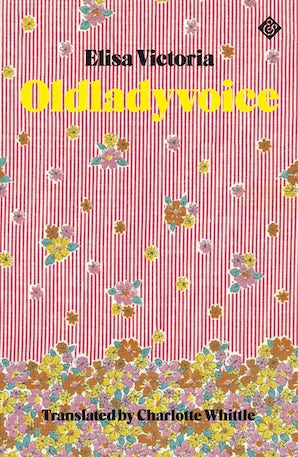 Amid the oppressive heat, and in the aftermath of the exuberance of Seville’s Expo ’92, Marina spends a chaotic summer with her grandmother while her mother receives hospital treatment for a grave but unnamed illness. There are no rules—swearing, talking about lovers, eating treats and staying up late are all allowed, and it is a summer with endless possibilities.

Marina still plays with dolls, but also watches pornographic movies and fantasises about sex and violence. And as she faces the challenging transition to adolescence, she is torn between the safe world of childhood and the sexual feelings that obsess her.

In Oldladyvoice, debut author Elisa Victoria presents a fresh and vivid take on growing up, through the eyes of a funny, perceptive and endearing narrator.

Charlotte Whittle has translated works by Silvia Goldman, Jorge Comensal and Rafael Toriz, among others. Her translation of Norah Lange’s People in the Room was longlisted for the American Literary Translators Association prize and shortlisted for both the Warwick Prize for Women in Translation and the Society of Authors’ TA First Translation Prize. Her translation of Notes from Childhood, also by Norah Lange, was published by And Other Stories in 2021. She lives in New York.