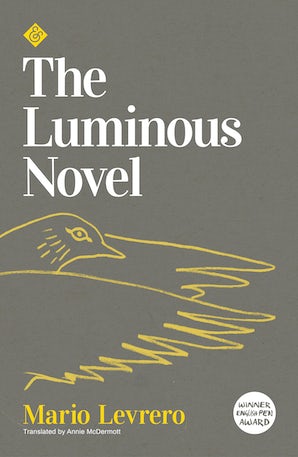 ‘Perhaps the luminous novel is this thing that I started writing today, just now. Maybe these sheets of paper are a warm-up exercise. [...] But it’s quite possible that if I go on writing – as I usually do – with no plan, although this time I know very well what I want to say, things will start to take shape, to come together. I can feel the familiar taste of a literary adventure in my throat.
I’ll take that as confirmation, then, and start describing what I think was the beginning of my spiritual awakening – though nobody should expect religious sermons at this point; they’ll come later. It all began with some ruminations prompted by a dog.’

A writer attempts to complete the novel for which he has been awarded a big fat Guggenheim grant, though for a long time he succeeds mainly in procrastinating – getting an electrician to rewire his living room so he can reposition his computer, buying an armchair, or rather, two: ‘In one, you can’t possibly read: it’s uncomfortable and your back ends up crooked and sore. In the other, you can’t possibly relax: the hard backrest means you have to sit up straight and pay attention, which makes it ideal if you want to read.’

Insomniacs, romantics, and anyone who’s ever written (or failed to write) will fall in love with this compelling masterpiece told by a true original, with all his infuriating faults, charming wit, and intriguing musings.

Mario Levrero was born in Montevideo, Uruguay in 1940 and died there in 2004. He wrote twelve novels and several short story collections and it was not long before he gained cult status amongst readers in Uruguay and Argentina, despite keeping a low profile. He has inspired Latin American writers such as Rodolfo Fogwill, César Aira and Alejandro Zambra. In 2000 he was awarded the Guggenheim grant that allowed him to complete work on The Luminous Novel, which was published posthumously.

Annie McDermott’s translations include Mario Levrero’s Empty Words and The Luminous Novel for And Other Stories, as well as Loop by Brenda Lozano, Feebleminded by Ariana Harwicz (co-translation with Carolina Orloff) and City of Ulysses by Teolinda Gersão (co-translation with Jethro Soutar). She has previously lived in Mexico City and São Paulo, and is now based in London.