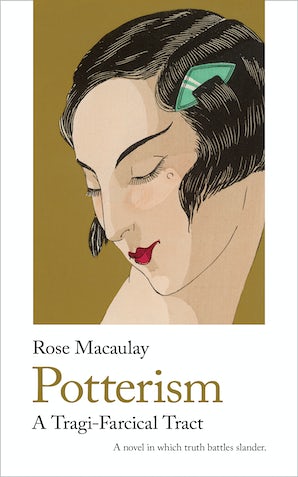 Back in print for the first time in seventy years is award-winning novelist Rose Macaulay’s Potterism, a satire on British journalism through the lens of both the owners and employees of a popular newspaper empire.

When Jane and Johnny Potter are at Oxford they learn to despise their father’s popular newspapers, though they still end up working for the family business. But Jane is ambitious and wants more than society will let her have.

Mrs. Potter is a well-known romantic novelist, whose cheap novelettes appear in the shop-girls’ magazines. She has become unable to distinguish fact from fiction, and her success gives her an unhealthy estimation of her own influence. When she visits a medium to try to find the truth about the murder of her son-in-law, she wreaks terrible damage.

Arthur Gideon works for Mr. Potter as an editor. He respects his employer’s honesty while he despises the populist newspapers he has to produce. His turbulent campaigning spirit, and his furious resistance to anti-Semitic attacks, make him unpopular, and becomes an unwitting target of malice.

With an introduction is by Sarah Lonsdale, Potterism is about the Potter newspaper empire, and the ways in which journalists struggled to balance the truth and what would sell, during the First World War and into the 1920s.

Emilie Rose Macaulay (1881-1958) was a British novelist, journalist, cultural commentator, biographer, critic and early adopter of radio as a broadcaster and a writer. She was the first fiction reviewer for the feminist weekly Time and Tide in the 1920s, also writing for Good Housekeeping, and was celebrated for her acerbic and witty satires. In the First World War she worked as a Land Girl and a censor, and in the Second World War she drove ambulances and was bombed out of her apartment, losing all her possessions including her letters from her recently dead secret lover, the former Irish priest Gerald O'Donovan, for two of whose children she was godmother. She was made a Dame by Queen Elizabeth II for services to literature in 1958. Her most famous novel, The Towers of Trebizond (1956), is famous for having brought many wavering Anglo-Catholics back to the Church. She did not marry, adored parties and was a notoriously bad driver.