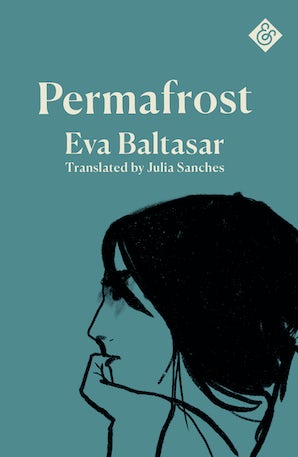 Permafrost’s no-bullshit lesbian narrator is an uninhibited lover and a wickedly funny observer of modern life. Desperate to get out of Barcelona, she goes to Brussels, ‘because a city whose symbol is a little boy pissing was a city I knew I would like’; as an au pair in Scotland, she develops a hatred of the color green. And everywhere she goes, she tries to break out of the roles set for her by family and society, chasing escape wherever it can be found: love affairs, travel, thoughts of suicide.

Full of powerful, physical imagery, this prize-winning debut novel by acclaimed Catalan poet Eva Baltasar was a word-of-mouth hit in its own language. It is a breathtakingly forthright call for women’s freedom to embrace both pleasure and solitude, and speaks boldly of the body, of sex, and of the self.

Eva Baltasar has published ten volumes of poetry to widespread acclaim. Her debut novel, Permafrost, received the 2018 Premi Llibreter from Catalan booksellers and was shortlisted for France's 2020 Prix Médicis for Best Foreign Book. It is the first novel in a triptych which aims to explore the universes of three different women in the first person. The author lives a simple life with her wife and two daughters in a village near the mountains.

Julia Sanches translates from Portuguese, Spanish, and Catalan. For And Other Stories she has translated from all three languages—from the Portuguese, Now and at the Hour of Our Death by Susana Moreira Marques, from the Catalan the forthcoming Permafrost by Eva Baltasar, and from the Spanish, Slash and Burn by Claudia Hernández, for which she won a PEN/Heim award. She has also translated works by Noemi Jaffe, Daniel Galera, and Geovani Martins, among others. She is a founding member of the Cedilla & Co. translators’ collective, and currently lives in Providence, Rhode Island.