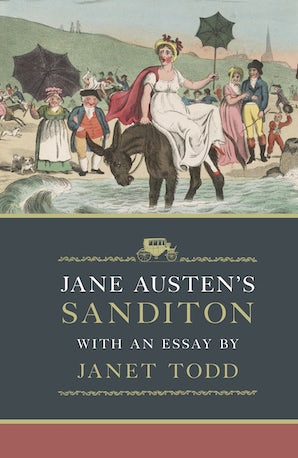 With an Essay by Janet Todd

By Janet Todd and Jane Austen

Sanditon is Jane Austen’s last novel, left unfinished when she died. A comedy, it continues the strain of burlesque and caricature she wrote as a teenager and in private throughout her life. This beautifully illustrated volume combines the full novel and Todd’s ground-breaking essay, where she contextualizes Austen’s life and work, Sanditon’s connection with Northanger Abbey (1818) and the Austen family’s speculation in England and the West Indies. She examines the moral and social problems of capitalism, entrepreneurship, and whether wealth trickles down to benefit the place it is made. In explaining the early nineteenth-century culture of self: the exploitation of hypochondria, health fads, seaside resorts, cures, she contends that Sanditon is an innovative, ebullient study of human beings’ vagaries - rather than using common sense, Sanditon’s characters follow intuition and bodily signs believing that desire can be translated into physical facts and speech can transform fantasy into reality. Todd shows Austen’s themes to be akin to contemporary concerns: the mistakes of the self-deluded reveal the inevitable, ridiculous gap between how we think of ourselves and how we appear and sound to others.

Janet Todd (Radiation Diaries, Aphra Behn: A Secret Life, A Man of Genius, Lady Susan Plays the Game) is a leading scholar and editor of Jane Austen’s work. The General Editor of The Cambridge Edition of the Works of Jane Austen, editor of Jane Austen in Context, and author of The Cambridge Introduction to Jane Austen, she is a former president of Lucy Cavendish College, Cambridge, a novelist, biographer, and literary critic, she is an Emerita Professor at the University of Aberdeen and an Honorary Fellow of Newnham College, Cambridge. Born in Wales, she grew up in Britain, Bermuda and Ceylon/Sri Lanka and has worked at universities in Ghana, Puerto Rico, India, the US (Douglass College, Rutgers, University of Florida), Scotland (Glasgow, Aberdeen) and England (Cambridge, UEA). She is completing her third novel, Don’t You Know There’s a War On? (2019) and lives in Cambridge and Venice.