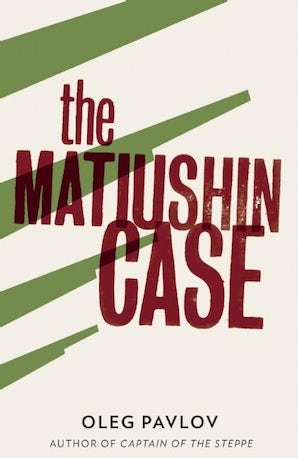 The Matiushin Case is among the most powerful recent works of Russian fiction. Deriving, like Captain of the Steppe (2013, And Other Stories), from Oleg Pavlov's experience of the declining Soviet Union, it follows Matiushin, a young man damaged by brutality at home and then in the army. Drawing on Aleksandr Solzhenitsyn's "labor-camp writing," Oleg Pavlov builds a unique tension between the horrors of conscription and the dreamlike, timeless mode of his writing. Matiushin's "crime and punishment" thus emerge with compelling inevitability; the victim turns killer. This hell is above all psychologicaland no less universal than those of Dante or Dostoevsky.

Oleg Pavlov is one of the most highly-regarded contemporary Russian writers. He won the Russian Booker Prize in 2002 and the Solzhenitsyn Prize in 2012.

Oleg Pavlov is one of the most highly-regarded contemporary Russian writers. He has won the Russian Booker Prize (2002) and the Solzhenitsyn Prize (2012) among many other awards. Born in Moscow in 1970, Pavlov spent his military service as a prison guard in Kazakhstan. Many of the incidents portrayed in his fiction draw on his experiences there. He recalls reading about Karabas, the camp he had worked at, in Aleksandr Solzhenitsyn’s The Gulag Archipelago, then became Solzhenitsyn’s secretary and was inspired to continue the great writer’s work. Pavlov writes in the tradition of great Russian novelists such as Dostoyevsky and Solzhenitsyn.

Andrew Bromfield has been a full-time translator from Russian for more than twenty years. He is co-founder and original editor of Glas, a journal of modern Russian literature in English translation. His numerous translations include most books by Victor Pelevin and Boris Akunin, Mikhail Bulgakov’s A Dead Man’s Memoirs (A Theatrical Novel) and A Dog’s Heart (An Appalling Story), Leo Tolstoy’s War and Peace – the Original Version and the two-volume Russian Criminal Tattoo Encyclopaedia.