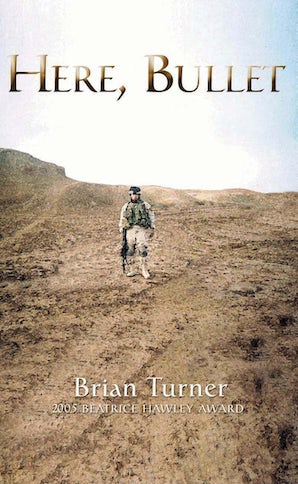 A first-person account of the Iraq War by a solider-poet, winner of the 2005 Beatrice Hawley Award.

Adding his voice to the current debate about the US occupation of Iraq, in poems written in the tradition of such poets as Wilfred Owen, Yusef Komunyakaa (Dien Cai Dau), Bruce Weigl (Song of Napalm) and Alice James’ own Doug Anderson (The Moon Reflected Fire), Iraqi war veteran Brian Turner writes power-fully affecting poetry of witness, exceptional for its beauty, honesty, and skill. Based on Turner’s yearlong tour in Iraq as an infantry team leader, the poems offer gracefully rendered, unflinching description but, remarkably, leave the reader to draw conclusions or moral lessons. Here, Bullet is a must-read for anyone who cares about the war, regardless of political affiliation.

Brian Turner earned an MFA from the University of Oregon and lived abroad in South Korea for a year before serving for seven years in the US Army. He was an infantry team leader for a year in Iraq beginning in November 2003 with the 3rd Stryker Brigade Combat Team, 2nd Infantry Division. Prior to that, he was deployed to Bosnia-Herzegovina in 1999 with the 10th Mountain Division. His poetry has been published in Poetry Daily, The Georgia Review and other journals, and in the Voices in Wartime Anthology.