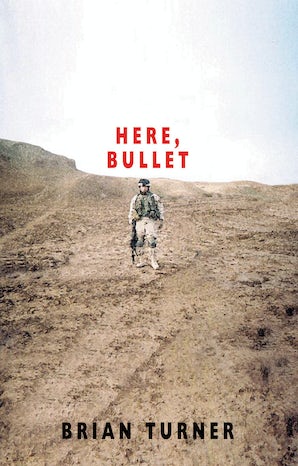 Here, Bullet is a harrowing, first-hand account of the Iraq War by a soldier-poet. Iraq war veteran Brian Turner writes powerful poetry of witness, exceptional for its beauty, honesty and skill. Like Keith Douglas’s poems from the North African desert in the Second World War, Turner’s testament from the war in Iraq offers unflinchingly accurate description but no moral judgement, leaving the reader to draw any conclusions. Repetitive media reports show little of people’s daily experience of the five-year war. In Here, Bullet, we see and feel the devastatingly surreal reality of everyday life and death for soldiers and civilians through the eyes of an eloquent writer who served in the US Army for seven years, with a year’s tour of duty in Iraq as an infantry team leader.

Brian Turner served for seven years in the US Army. He was an infantry team leader for a year in Iraq from November 2003 with the 3rd Stryker Brigade Combat Team, 2nd Infantry Division. In 1999-2000 he was deployed to Bosnia-Herzegovina with the 10th Mountain Division. Born in 1967, he received an MFA from the University of Oregon and lived abroad in South Korea for a year before joining the army. His poetry was included in the Voices in Wartime Anthology published in conjunction with a feature-length documentary film. His collection Here, Bullet (Bloodaxe Books, 2007) was first published in the US by Alice James Books in 2005, where it has earned Turner nine major literary awards, including a 2006 Lannan Literary Fellowship and a 2007 NEA Literature Fellowship in Poetry. In 2009 he was given an Amy Lowell Traveling Fellowship. His second collection, Phantom Noise was published by Alice James Books in the US and by Bloodaxe Books in the UK in 2010, and was shortlisted for the T.S. Eliot Prize. His memoir My Life as a Foreign Country was published by Jonathan Cape in 2014.