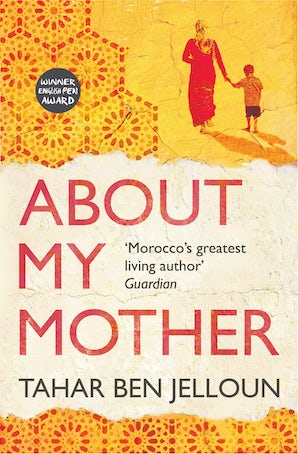 "A writer of social and moral acuteness."—Los Angeles Times

"A writer of much originality."—The Chicago Tribune

Lalla Fatma believes she is in Fez in 1944—where she grew up—not in Tangier in 2000, where the story begins.

Guided by her fragmented memories, Ben Jelloun reimagines his mother's life in Fez at the end of the war, in the heavily ritualised world of custom and tradition that saw her married, pregnant, and widowed by sixteen. He gains privileged, painful access to her lives as daughter, sister, thrice-widowed wife—lives in which she had little say, mostly spent working in kitchens, marked by a deep religious faith and love for her family—as Alzheimer's rips them all away.

A delicate portrait of a woman's slow and unwinding descent into dementia, About My Mother maps out the beautiful, fragile, and complex nature of human experience in prose equally tender and compelling.

Tahar Ben Jelloun is an award-winning and internationally bestselling Moroccan novelist, essayist, critic, and poet. Regularly shortlisted for the Nobel Prize, he has won the Prix Goncourt and the International IMPAC Dublin Literary Award. Ben Jelloun received the rank of Officier de la Légion d'honneur in 2008. A frequent contributor to Le Monde, Panorama, the New Yorker, and the Paris Review, his other works include The Blinding Lights of Absence, Leaving Tangier, Sand Child, and Racism Explained to My Daughter.

Tahar Ben Jelloun: Born in Fez, Morocco, in 1944, Tahar Ben Jelloun is an award-winning and internationally bestselling novelist, essayist, critic, and poet. Regularly shortlisted for the Nobel Prize, he has won the Prix Goncourt (he was the first North African to win France’s most prestigious literary prize) and the International IMPAC Dublin Literary Award. His work has also been shortlisted for the Independent Foreign Fiction Prize in the UK. Ben Jelloun received the rank of Officier de la Légion d'honneur in 2008. He is a frequent contributor to Le Monde, La Repubblica, El País, Panorama, The New Yorker, and The Paris Review. Some of his works in English translation include The Blinding Lights of Absence, Leaving Tangier, Sand Child and Racism Explained to My Daughter. His fans have numbered Samuel Beckett and Roland Barthes. He lives between Paris and Tangier.

Ros Schwartz: With nearly 70 titles to her name, Ros Schwartz has translated a wide range of Francophone fiction and non-fiction writers including Andrée Chedid, Aziz Chouaki, Fatou Diome, Dominique Manotti (whose Lorraine Connection won the 2008 International Dagger Award), and Dominique Eddé (whose novel Kite was longlisted for the 2013 Best Translated Book Award in the USA). In 2010 she published a new translation of Antoine de Saint-Exupéry’s The Little Prince (shortlisted for the Marsh Award for Children’s Literature in Translation) and she is currently involved in re-translating a number of titles for Penguin Classics’ new Simenon edition. She was made Chevalier dans l’Ordre des Arts et des Lettres for her services to literature in 2009.

Lulu Norman: Lulu Norman has translated the works of Albert Cossery, Mahmoud Darwish, Amin Maalouf, Tahar Ben Jelloun and the songs of Serge Gainsbourg. She has also written for national newspapers and the London Review of Books, among others. Her first translation, Mahi Binebine’s Welcome to Paradise, was shortlisted for the Independent Foreign Fiction Prize in the UK. Her most recent, Binebine’s Horses of God, won an English PEN award in 2013, was featured among World Literature Today’s 75 Most Notable Translations and made her runner up for the Scott Montcrieff 2014 award. It was also shortlisted for 2014’s Best Translated Book Award and the 2015 Dublin IMPAC Award.