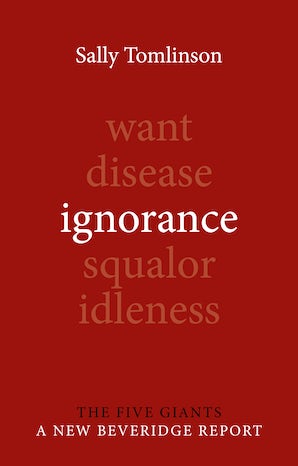 As a universal experience school provokes strongly-held opinions. The views of teachers, parents, pupils compete with those of educational theorists, social engineers and ideologues. Although undoubtedly much improved since the time of Beveridge, the provision of education remains beset with challenges. Sally Tomlinson’s engaging, and at times personal, journey through Britain’s postwar experience of schooling and education reform draws on her many years of working in the sector. She explains how legacies of different systems and countless policy initiatives have led to the persistence of social inequalities, entrenching them in society and perpetuated by the power dynamics that they create between class, race and gender. Furthermore, she shows how the increasing mania for testing, targets, choice and competition, which has made schools into a marketplace and young people into consumers, threatens to undermine schools as a place where citizens can share learning and the democratic values that are needed as much today as they were in Beveridge’s time.

Sally Tomlinson is Emeritus Professor at Goldsmiths, University of London and an Honorary Fellow in the Education Department at Oxford University. She has held professorial chairs at the universities of Lancaster and Swansea. Her most recent books are Rule Britannia: Brexit and the End of Empire (with Danny Dorling) (2019) and Education and Race from Empire to Brexit (2019).