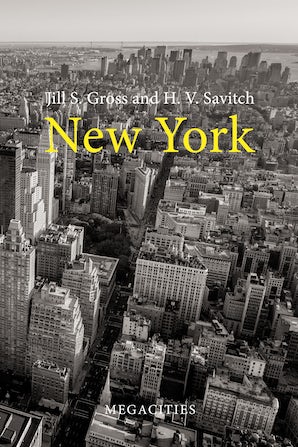 New York became the world's first megacity in the 1930s. Since then it has remained the largest city in North America but, globally, it has been surpassed in size by the younger cities of Asia. Nevetheless its metropolitan area is home to 20 million people and it continues to be America's premier city.

Jill Gross and Hank Savitch examine the New York metropolis through the lens of a series of twenty-first century pressures related to demography, economic growth, urban development, governance, immigration, leadership and globalization. How New York's institutions and policies have either risen to meet these challenges, stagnated in the face of them, or simply failed to resolve them is the focus of the book. In particular, the authors examine the muncipality of New York City, as the heart of the megacity, and how it navigates the increasingly complex battles with higher levels of government over rights to the city and resource needs.

The book examines the shifting tides of corporate centred development, particularly the vibrant financial sector, and how it has leveraged its powerful geopolitical position in the global economy to continue to grow. The question of governance is explored along with the growing reliance on public–private partnerships to manage megacity problems. Mayoral control and leadership is shown to have been fundamental to meeting the needs of the residential population – issues such as crime, schools and housing – along with the demands of business. With over 3 million immigrants, New York is the most diverse city in North America, but it is also among the most segregated and the authors investigate the positive and negative outcomes that such diversity brings.

As a comprehensive analysis of the political, economic and social dynamics that have made New York a megacity today, the book will be of interest to a broad readership in political science, public administration, public policy, sociology, geography, political economy, urban planning and regional studies.

Jill Simone Gross is Professor of Political Science in the Department of Urban Policy and Planning at Hunter College, City University of New York. She is Director of the Graduate Program in Urban Policy and Leadership.


Hank V. Savitch is a Global Fellow of the Wilson Center, Washington DC and Emeritus Brown & Williamson Distinguished Professor of Urban & Public Affairs, University of Louisville. He has been co-editor of the Journal of Urban Affairs and President of the Urban Politics Section of the American Political Science Association. He has published thirteen books and edited volumes on various aspects of urban development, public policy and regional governance. His co-authored book, Cities in the International Marketplace (2004) won the APSA award for best book in urban studies.