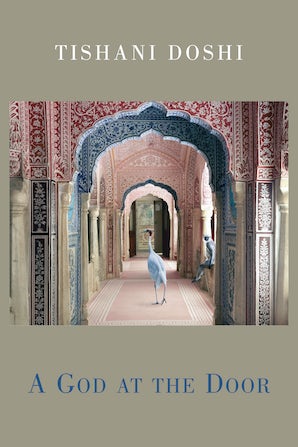 A God at the Door

An exquisite collection from a poet at the peak of her powers, A God at the Door spans time and space, drawing on the extraordinary minutiae of nature and humanity to elevate the marginalised. These poems, taken together, traverse history, from the cosmic to the quotidian. There is a playful spikiness to be found in poems like 'Why the Brazilian Butt Lift Won’t Save Us', while others, such as 'I Found a Village and in it Were All Our Missing Women', are fed by rage. As the collection unfolds, there are gem-like poems such as 'I Carry My Uterus in a Small Suitcase' which sparkles on the page with impeccable precision. Later, there are the sharp shocks delivered by two mirrored poems set side by side, 'Microeconomics' and 'Marcoeconomics'. Tishani Doshi's poetry bestows power on the powerless, deploys beauty to heal trauma, and enables the voices of the oppressed to be heard with piercing clarity. From flightless birds and witches, to black holes and Marilyn Monroe, A God at the Door illuminates with lines and images that surprise, inflame and dazzle.

Tishani Doshi is an award-winning poet and dancer of Welsh-Gujarati descent. She was born in Madras, India, in 1975. She received her masters in writing from the Johns Hopkins University in America and worked in London in advertising before returning to India in 2001 to work with the choreographer Chandralekha, with whom she performed on many international stages. An avid traveller, she has been trekking in the Ethiopian Bale Mountains, visited Antarctica with a group of high-school students, and documented the largest transvestite gathering in Koovakam. She has written about her travels in newspapers such as the Guardian, International Herald Tribune, The Hindu and the Financial Times. She won an Eric Gregory Award for her poetry in 2001. In 2006, she won the All-India Poetry Competition, and her debut collection, Countries of the Body (Aark Arts), won the Forward Prize for Best First Collection. Her first novel, The Pleasure Seekers (Bloomsbury, 2010), was longlisted for the Orange Prize and shortlisted for the Hindu Fiction Award, and has been translated into several languages. Her second poetry collection, Everything Begins Elsewhere, was published by Bloodaxe Books in 2012. Fountainville: new stories from the Mabinogion was published by Seren in 2013. Her third collection, Girls Are Coming Out of the Woods (Bloodaxe Books, 2018), is a Poetry Book Society Recommendation and was shortlisted for the Ted Hughes Award for New Work in Poetry 2018. Her second novel, Small Days and Nights (Bloomsbury, 2019), was shortlisted for the RSL Ondaatje Prize. Her fourth collection, A God at the Door, is published by Bloodaxe in 2021. Tishani Doshi currently lives on a beach between two ﬁshing villages in Tamil Nadu with her husband and three dogs, and sometimes moonlights as a dancer.